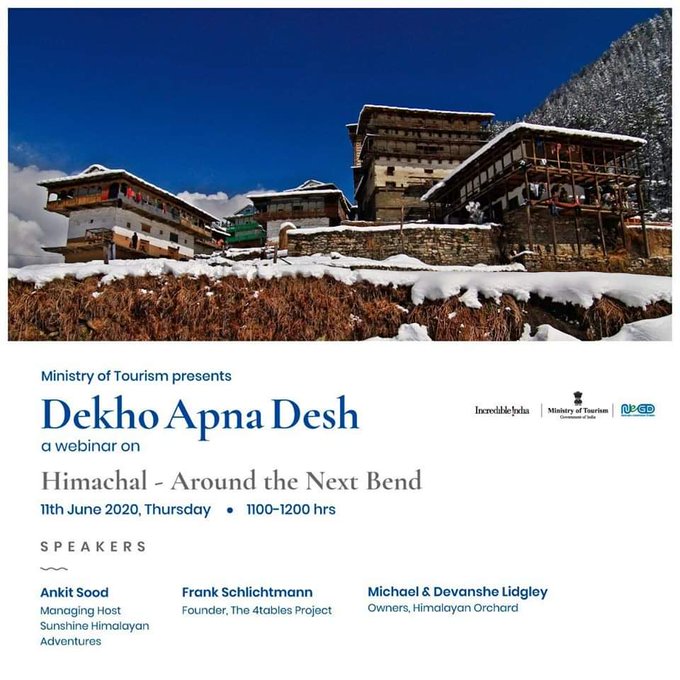 Mr. Frank Schlichtmann started the session by highlighting an interesting Art village Called Gunehar, beautiful amalgamation of nature, streams, forest. Gunehar is located in the Kangra district. The idea behind this Art project in Gunehar is to develop conscious effort among the travellers to put focus on the village without affecting the place with too much crowding. Gunehar is well connected by road, rail and air. The valley has many small villages and Gunehar is the largest panchayat with just 3000 people. People are largely Gaddis with a few Bara Bhangalis. The settlement started a little 100 years ago. Originally people of the village are shepherds but now many of them are farmers, some have shops and some work. Villagers are grounded, have sense of dignity and knowledgeable. 4 tables project started in the year 2008 with good participation, followed by Art festival in 2013. Art shops were developed, inviting the artists to come and work in empty spaces and present their art work which is attended by people from all walks of life. The whole event is a joint venture with the artist, visitors and villagers. The villagers call it Mela. It has become a huge success and final week is organised as art festival with theatre, music, film screening etc. Local cultural elements are well represented towards the closing ceremony of the Art festival.

Mr.Ankit Sood took us virtually through the World Heritage Site Great Himalayan National Park located in the Kullu region. Great Himalayan National Park is spread across four valleys-Sainj valley, Jiwa Nal valley, Tirthan Valley and Parvati valley. The park protects over 1,000 plant species, including many medicinal herbs, 31 mammal species and 209 bird species, as well as amphibians, reptiles and insects. Four of GHNP’s mammal species and three of its bird species are globally threatened, including the musk deer and the western horned tragopan.

The third little known destination in Himachal Pradesh showcased by Michael & Devanshe Lidgley was that of Kotkhai, a town in Shimla district.

• Kotkhai Palace is 800 years old and the royal family is still residing in the palace.

• Rukhla village – An apple growing village. A three hour hike from Rukhla takes you to the highest point where you can have a mesmerising 360 degree view of Greater Himalayas. The village is well known for its majestic flora and fauna including Black Bear, Barking Deer, Musk Deer, Langur, Leopards and Monal.

• Naga cult-.Master of the underworld reigns over subterranean water sources linked to fertility. Naag is the son of Bhuri Mata, a powerful Goddess worshipped in Himachal and sacrifice of sheep pleases him. Songs are sung in Pahadi dialect.

The Dekho Apna Desh Webinars are conducted in association with National e-Governance Division (NeGD) created by the Ministry of Electronics & Information Technology (MeitY).

The next episode of the webinar scheduled on, 13th June 2020 at 11.00 am, is titled Trekking in the Himalayas – Magical Experiences. Registrations https://bit.ly/HimalayasDAD

Colloquium on the aftermath of COVID-19 on Corporate Sector