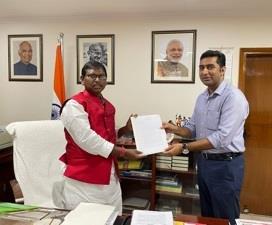 NEW DELHI : Union Minister for Tribal Affairs, Sh Arjun Munda reviewed the project proposals and various initiatives submitted by Jammu and Kashmir Tribal Affairs Department aimed at socio-economic and welfare planning for tribal communities in J&K. Discussion was held on various proposals and decisions taken for many projects. On intervention of the Lieutenant Governor Sh Manoj Sinha a number of flagship programmes are being extended to J&K the proposals for which were submitted by the Tribal Affairs Dept.

Minister for Tribal Affairs held through discussion on proposals submitted by the Jammu and Kashmir Government under various sectors including education, essential services, tribal health plan, livelihood schemes, farming, infrastructure, transit accommodations, IT initiatives and development projects among others.

He asked the concerned divisions in the ministry for expeditious processing of proposals for approval in order to ensure required facilities and services are extended to tribal population in J&K. The issue of funding under Art 275(1) was also discussed for early resolution.

Secretary, Tribal Affairs Department J&K, Dr Shahid Iqbal Choudhary projected the proposal for implementation of Integrated Village Development Scheme and inclusion of additional 65 villages in addition to central list of 302 villages and also notification of Dhoks (highland pasture habitations) as villages under the scheme in view migratory population residing in these locations needing various facilities. He also briefed the Ministry about the planning process initiated by the department for establishment of Integrated Tribal Development Authorities in various districts and solicited sanction by the ministry.

The projects submitted to the Ministry include establishment of 07 more Eklavya Model Residential Schools, 02 Model Day Boarding Schools, 02 Centres of Excellence in Sports, grant for Tribal Smart Schools, establishment of 80 hostels in various districts and grant for Tribal Bhawan. Other important projects placed before the ministry for consideration and approval include Livelihood projects for tribal youth and women, sanction for creation of posts in Tribal Research Institute and extension of various schemes under TRIFED.

The meeting also deliberated about special income generating avenues for tribal population and dedicated efforts for migratory tribal population in J&K. The need for establishment of more hostels and residential schools was also highlighted. It was decided that in view of holistic plan submitted by the Tribal Affairs Department J&K the Union Ministry will take up inter-sectoral projects with various ministries for support through respective departments.