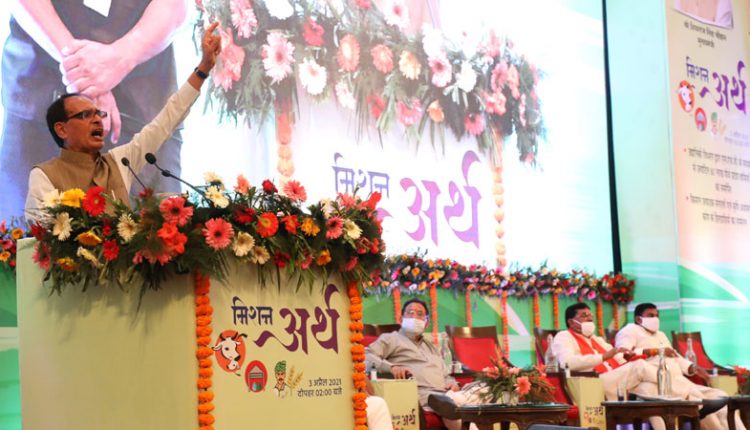 Bhopal : Chief Minister Shri Shivraj Singh Chouhan has said that the hard work of farmers has become the basis of the economy in the difficult conditions of Corona. The rich foodgrain production in the state last year has strengthened not only the state but also the country. The state government is making every effort to double the income of the farmers. By combining Farming-Animal Husbandry-Horticulture-Fisheries, diversification of crops through Cooperatives, food processing, packaging and proper marketing the state’s products will make splash not only in the country but all over the world. Chief Minister Shri Chouhan was addressing the state level Mission Earth Programme at Minto Hall on completion of one year of Madhya Pradesh government.

Government and society have to battle collectively against Corona

Chief Minister Shri Chouhan said that the state government and society have to fight together against the Corona infection. The use of masks must be followed seriously, and must not be taken lightly at any cost. He appealed to the people of the country to come forward through self-motivation for vaccination. Chief Minister Shri Chouhan said that lockdown is not being imposed so that the economy is not affected. The cooperation of all is necessary to control Corona.

The Sex sorted Semen Production laboratory established at Bhadbhada Bhopal will facilitate sex sorted production of high heritability Desi cows like Gir, Sahiwal, Tharparkar and murra breeds of buffaloes. With its consumption, 90 percent female calves will be born, which will increase milk production due to rise in number of cows and buffaloes of high genetic quality. Unnecessary expenditure will be saved in the upbringing of calves. The number of destitute animals will also be limited.

FPOs are constituted with a minimum of 300 to 500 farmer members. As many as 418 FPOs of the state are working in various commercial sectors like seed production, procurement, processing, milk production, poultry farming, honey production, marketing etc. FPOs are being benefitted under the Agriculture Infrastructure Fund scheme.

Under this scheme, agricultural entrepreneurs, FPOs, startups, self-help groups, etc. who wish to take loan from banks for construction of agricultural infrastructure, are provided loans up to a limit of Rs two crores. This financial assistance is being provided to them for cold storage, cold chain, warehouse, silo, pack house, grading and packaging unit, logistics facility, e-ripening chamber, etc. Under this scheme, Madhya Pradesh ranks first in the entire country.

The cattle of the state will also have a unique ID now. Under the scheme, the cattle will have tags in their ear. A twelve-digit number is inscribed on the tag which is being updated in the Enough Software. The software will have an account of the cattle which will also be available online. So far, 2 crore 45 lakh cows and buffaloes have been tagged in the state. In this scheme, Madhya Pradesh ranks first in the entire country.

‘Jal Shakti Abhiyan: Catch the Rain’ should be implemented effectively in Madhya Pradesh

iednewsdesk Oct 28, 2021
Today, there are a large number of different digital rotary encoders, which are used to measure the angle of any…

SPbPU: To convert heat into electricity: scientists developed an…

University of Tokyo: Monitoring the surprising lifestyle of whales