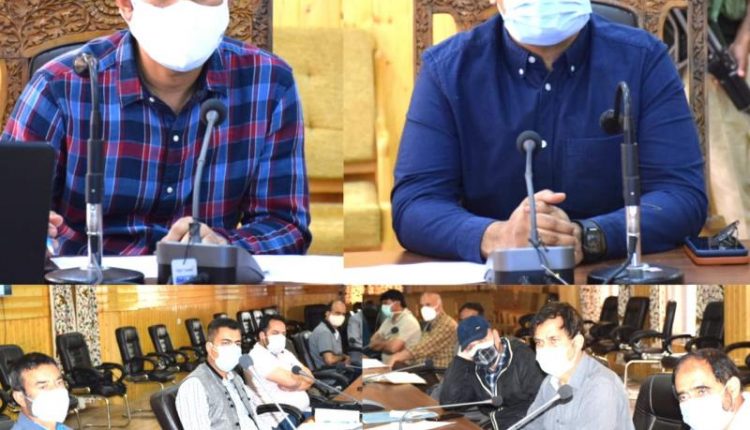 The meeting discussed several developmental projects coming up at 21 villages of four Tehsils of the district that have been included in Srinagar Metropolitan Development Authority including Sonawari, Shardpore, Nowgam, and Hajin.

Threadbare discussion was held on the projects taken up under the SMDA including multilevel car parking, up-gradation of Bus Adda, Development of public parks, sanitary complexes and other projects. The meeting also discussed the bottlenecks that hinder the progress of these projects. On-spot directions were passed for removing the bottlenecks.

It was given out that a Water kingdom, Synthetic Turf Badminton courts and Youth Hostel shall also come up at Gurez, Sumbal and Bandipora on outsourcing basis and modalities for establishment of the same were also discussed.

Dr Owais stressed upon the concerned officers to work in coordination to ensure effective implementation of the dream projects. He said skill development initiatives are being given due concentration for enhancing the employability of the unemployed youth.

He said the Mission Youth is an ambitious programme to nurture the capabilities and potential of youth through the intervention of appropriate and common platforms where all the activities of youth development are carried out for better and positive results.

The meeting was attended by Joint Director Planning, Assistant Commissioner Development, Chief Education Officer and other senior officers of the district.