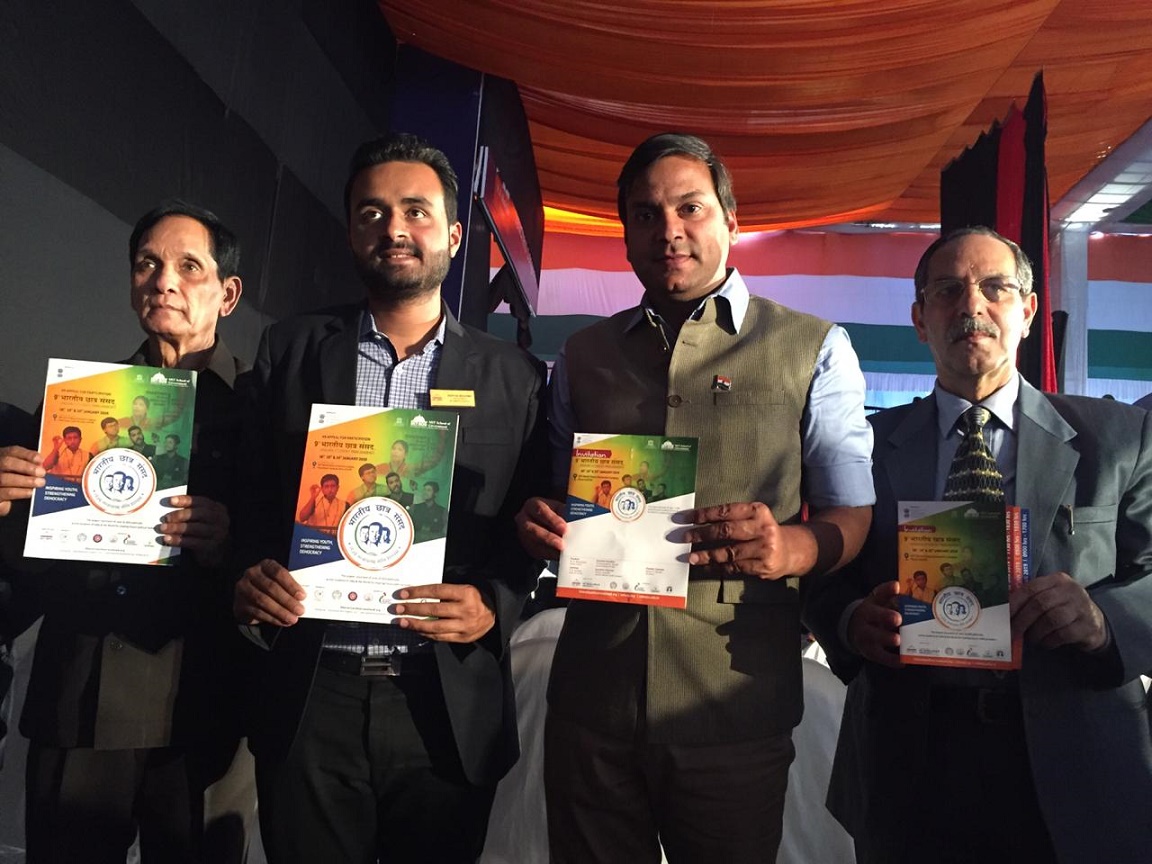 BharatiyaChhatraSansad (BCS) is a first-of-its-kind social initiative, aimed at channelizing the youth towards the strengthening of democracy and tackling issues related to nation-building. This event invitesstudents from colleges and institutions from across the country. The 9th edition of BCS will have prominent personalities from different walks of life providing their views on a range of topics regarding India’s progress and development as an emerging global power.The aim of the event is to encourage young minds to be politically active and work towards the development of the country.

Speaking on the occasion, Mr. Rahul Karad, Founder &Dean, MIT-SOGand Executive President- MIT World Peace University said, “India is rapidly moving towards robust and structurally sound Global Economic Superpowerbut to win this race we will need progressive and knowledgeable leaders who can cross this hurdle that arise in Political decision making. At MIT-SOG we are trying to bridge this gap and committed to create leaders for tomorrow, who have the required dedication for the nation-building. To strengthen this we have started UGC approved 2 years Masters Course in Political Leadership Government (MPG) and BCS, whichis the largest classroom of over 10,000 politically active students of India and the world for creating future political leaders. BCS is critical to developing a sense of character and the right ideals among the youth, and giving them an opportunity to interact with some of the best minds in the country. The overwhelming response to the last eight editions has positioned BCSas a platform for the youth of the country, where they can share their views and concerns on the issues pertaining to them. On this occasion, I would also like to thank Shri. DevendraFadnavis – Hon’ble Chief Minister of Maharashtra for supporting this endeavor by becoming the Chief Patron.”

In the 9th edition of BCS,students will get to listen and interact with various dignitaries from Political, social and entrepreneurial background. DevendraFadnavis- Chief Minister-Maharashtra, Sharad Pawar- National President- NCP and Rajyasabha MP,Smt. Brinda karat-Senior leader-CPI, Smt. Trupti Desai-Gender Equality Activist, Adv. Jignesh Mewani-Dalit Activist and MLA, Gujarat, Prakash Raj-Film Actor and Founder- Prakash Raj Foundation, Ashutosh-Senior Journalist, Hitendra Nath Goswami-Speaker- Assam State Legislative Assembly, ShankarsinhVaghela-Former CM-Gujarat, Tushar Gandhi President Mahatma Gandhi Foundation, Dr. Abhishek Manu Singhvi-Eminent Lawyer and MP Congress, Adv. Prashant Bhushan- Emiinent Lawyer and Social Activist, AdvMajeed Menon- MP Rajysabha NCP, Dr. A Velumani- Founder Thyrocare Technologies are among some of the prominent speakers at the three-day student parliament.
MIT’s School of Government (MIT-SOG) offers UGC approved 2 years Masters Course in Political Leadership Government (MPG) which is designed to channelize the strength of young aspirants and to enable them to be competent political leaders. This program helps individuals to better comprehend how governments operate and interact, the influence government policies have on the economic stability and growth, and how laws affect the social and political environment of the country. Those who are interested in contesting elections and or working with leading political leaders, social leader, and other government bodies, or as back office executive in political parties etc. gets highly benefited from this course. Students with Masters in Political Leadership and Government (MPG) gets various career prospects such as Research Associate, Political Analyst, Policy Associate, Political Strategist, Political Consultant, Election Research & Campaign Managers, Social Media Analyst,etc.
MIT-SOG is the only school in India which teaches political process to young students with political aspirations. This school is based on the Kennedy School of Politics, USA.