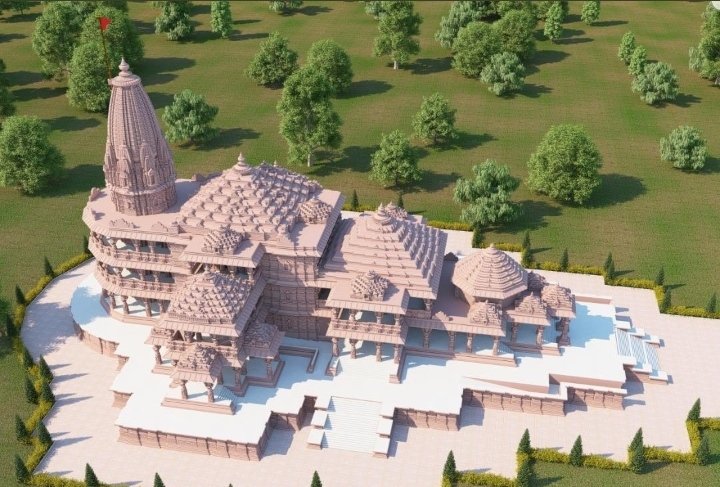 Pune: For the sacred work of constructing the Ram Temple in Ayodhya, which is the spiritual capital of India, MAEER’S MIT World Peace University, Pune will contribute Rs 21 crores. This was announced by Swami Govind Dev Giri, Treasurer of Shri Ram Janmabhoomi Tirtha Kshetra Trust at a press conference held in Ayodhya. Shri Ram Janmabhoomi Teerth Kshetra Trust Chairman Mahant Nritya Gopal Das Maharaj was also present on the occasion.
The amount was donated under the guidance of Founder President of MAEER’s MIT World Peace University, Prof. Dr. Vishwanath D. Karad, Head of India International Multiversity , Padmabhushan Dr. Vijay Bhatkar and Executive President of MIT World Peace University, Mr. Rahul V. Karad.
The amount of Rs 21 crores for this sacred work was contributed with the support of MAEER’S MIT World Peace University, Pune, MIT Art, Design & Technology University, Loni Kalbhor, Avantika University, Ujjain Madhya Pradesh, India International Multiversity, Pune and 75,000 students and 5 thousand teachers and other staff from MAEER’S MIT Group of Institutions.
In order to contribute to the construction of Lord Shriram Temple at Ayodhya, the organization will construct a beautiful sanctum sanctorum of 30 feet by 30 feet at the Temple in white and best quality marble. The sanctum sanctorum will have 12 pillars, 15 feet high. It is also proposed to erect a 27-foot-high gold-plated Jnanjyoti Roop Kalas. On top of this, a 81-foot high marble peak will be built on which beautiful images of various deities will be carved. In this sanctum sanctorum, a 11.5 feet magnificent and beautiful idol of Lord Shriram would be carved out of a single marble stone. Along with this 9.25 feet high idols of Shri Laxman and Mother Sita, will also be erected in single marble.
A Vishwadharmi Shriram Bharatiya Sankruti Darshan library will also be set up with a view to help the world understand Indian culture, traditions and wisdom. As mentioned earlier, the construction of the beautiful sanctum sanctorum and the grand library is expected to cost around Rs. 21 crores. Many well-wishers affiliated with the organization have contributed for this sacred initiative. MAEER’S MIT World Peace University will carry out its contribution by doing this work.
Founder and President of MAEER’S MIT World Peace University, Prof. Dr. Vishwanath D. Karad said that this noble work would be carried out in the name of Saint Shri Dnyaneshwar (13th Century) and Saint Shri Tukaram Maharaj (17th Century) – the famous Saints from Maharashtra-India. MIT World Peace University has also created the ‘World Peace Dome’ which is the Biggest Dome of the World, situated in Pune-India in the name of Philosopher Saint Shree Dnyaneshwara and Philosopher Saint Shree Tukaram. It has been carved in Makrana marble and is dedicated to World Peace. It was inaugurated on 2nd October, 2018 by Vice President of India Shri Venkaiah Naidu.

University of Leeds: A better understanding of…

The university aligns itself with Swami Vivekanand’s message who had said that in the 21st century, India will rise as a Vishwaguru and will guide the world towards happiness, satisfaction and peace. To make this a reality, they have contributed to this as Kar Seva. With our university’s long-standing commitment to ‘World Peace’, here is another endeavour from our end to do our bit in the sacred construction of the Sri Ram temple and spread the idea of spiritual awakening along with the pursuit of science, technology and academic excellence.

iednewsdesk Jan 21, 2022
Governments need to be careful about the messaging around compulsory mask wearing to ensure the policy is fully…

Columbia University: They Found a Way to Thematically Sort All of…

Johns Hopkins University: Study Finds Up to 30% of Patients with Wet…