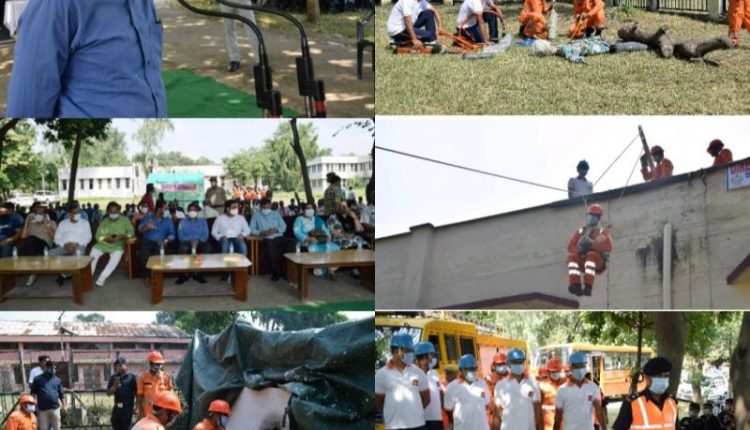 An earthquake-like situation was created at Government Degree College, Kathua presuming that the building partially collapsed due to the earthquake. The NDRF, SDRF, Ambulance services conducted the rescue operation and seriously injured and others in different medical conditions were shifted to makeshift base camp by following laid down procedure.

Creating situations like reaching to the disaster victims, rescue from multi storey buildings, cutting of walls, lifting of heavy debris were demonstrated by the NDRF, SDRF, Fire Services personnel and ambulances using different techniques and tools.

While lauding the efforts of the stakeholders involved in the mock drill exercise, the Deputy Commissioner, Rahul Yadav said the motive was to make all concerned departments and agencies operational ready to deal with the situation of earthquake disaster. He said Kathua district is located in IV & V of Seismic Zone, which shows the vulnerability to earthquakes in the district is severe. He said the mock drill is a learning exercise for all participating departments, agencies besides NCC, NSS and other College students.

The DC appreciated NDRF for well coordinated drill and said such mock exercises will go a long way to create awareness among the people and keep the stakeholders in readiness to face any eventualities. He said more such drills will be organised in other parts of the district in coming times.

Earlier, a tabletop exercise was held at the DC office complex the other day where the roles and responsibilities besides real time situation and response actions by concerned departments were discussed at length.