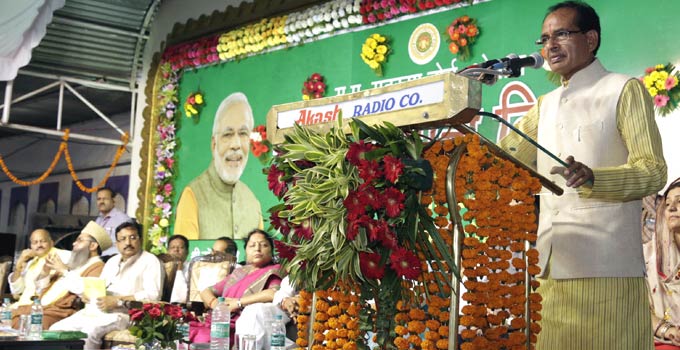 Bhopal : Chief Minister Shri Shivraj Singh Chouhan said that the amount given annually to each madrasa for infrastructure development will be hiked from Rs 25,000 to Rs 50,000. An auditorium would also be built for Madhya Pradesh Madrasa Board. Shri Chouhan was addressing the 20th foundation day of Madhya Pradesh Madrasa Board and one-day Madrasa Shiksha Sammelan today.

Shri Chouhan said that modern education should also be imparted along with religious training in madrasas. Children need to be skillfull as well in today’s modern times. While there is employment on the one hand, there is dearth of skillfull hands. We have to check this situation. He said that children would have to be given modern education besides religious training to make them good human beings. Shri Chouhan said that government has not let any kind of discrimination in the education of children. There are schemes for everyone. A student is the best gift of God. Government is responsible to do its best for the students. He said that the aim of education is the transfer of knowledge, making students skillful and giving them good culture. Shri Chouhan said that everyone should unite in serving the nation.

Attack on theatre and culture in the garb of “Hindu…

School Education Minister Kunwar Vijay Shah said that computer education is being given in madrasa classes since Class I. He said that the tricolour would be hoisted in madrasas also like in other schools of the state every day. He lauded the progress in imparting modern education in madrasa board. Madrasa Board Chairman Professor Sayyed Imadduddin told that so far 2575 madrasas have been registered in which 2 lakh 88 thousand children are studying.

“Zinda Hoon Mai – Break the routine and discover the uniqueness in you”, Ashish Vidyarthi