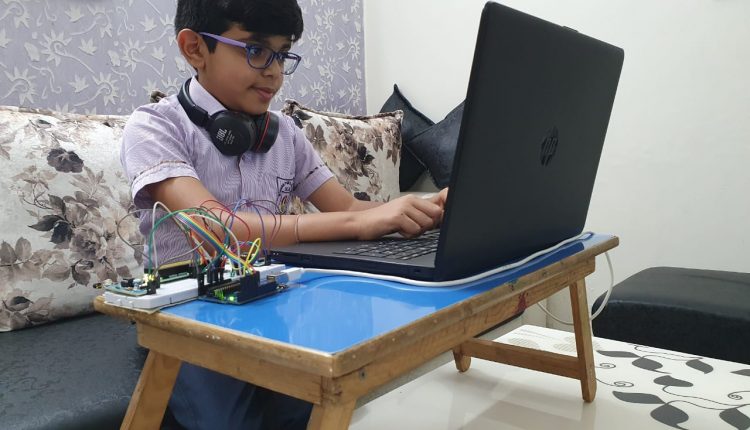 New Delhi: While the nation grapples with the COVID-19 crisis, one little school goer from Modern Public School, Shalimar Bagh, New Delhi, has used his time at home to invent a device that eases the process at the ground level.

Hiten Gautam, a budding inventor of class VI has come up with an entry-exit device to limit the number of people gathering in public places, using just the components picked out of the school’s Atal Tinkering lab. During trying times such as these when the government is focusing on enforcing social distancing norms, this device is expected to come in handy and automate the entire process.

The nifty little device has been programmed using the Arduino Uno which is an open-source microcontroller and has been neatly assembled on a breadboard with jumper cables to make the electrical connections. The device is equipped with Infra-Red (IR) sensors to detect the presence of the person entering or exiting the premises while the output is displayed on a 16 x 2 LCD screen for easy monitoring.

An LED light mounted on the circuit board immediately glows red as the number of people allowed to pass reaches the programmed limit, and only lets in more people after some have exited the premises. Currently, the demo device has been coded to let only 5 people through, but it can be re-programmed to suit the regional COVID-19 protocols as and when required.

Young Hiten is cognizant of the importance of social distancing amid the prevailing conditions and believes his innovation will help authorities execute the task of monitoring the number of people in one location with relative ease. The device can easily be used at shopping malls and railway stations, to begin with.

With this innovation coming at such a nascent age, MPS is has proven that it has raised its students to become responsible and compassionate human beings right from the start. “All-round holistic learning for our students has always been our objective at MPS. We are proud and elated to see our efforts bear fruits already! Hiten had also invented another sound-based device on the same underlying thought last year when he was in class V. We look forward to witnessing more such helpful inventions from our little genius”, said MPS Principal, Mrs. Alka Kapur.

iednewsdesk Jul 24, 2021
The Tokyo time zone will benefit Australian athletes going for gold at the Olympics. That's the view of jet lag…

NESAC will transform Shillong into the “Space Tech capital of the…

Home Minister Amit Shah, laid the foundation stone for the…

International project sets out to understand impact of COVID school…

President of India to visit Jammu & Kashmir and Ladakh from July…