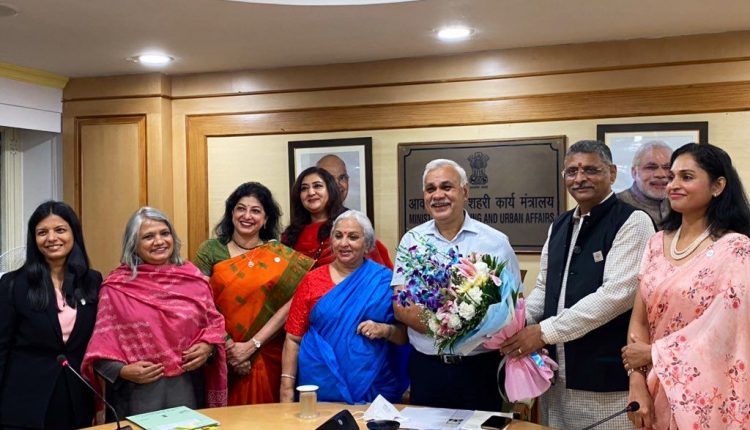 New Delhi: In a major move towards empowering women in the real estate sector, National Real Estate Development Council (NAREDCO), under the leadership of its newly appointed President Mr. Rajan Bandelkar, has established ‘NAREDCO MAHI’, the women’s wing of the realty body.

Shri Durga Shanker Mishra, Secretary for the Union Ministry of Housing and Urban Affairs, was the chief guest for the launch and first panel discussion under NAREDCO MAHI on ‘Women in real estate sector’ by the distinguished founder members.

During the panel discussion, it was mentioned that initially, NAREDCO MAHI will focus on providing access to women entrepreneurs to a world of opportunities, from direct interaction with policy makers, networking with corporate majors of Indian real estate industry and close linkages with the government.

In its aim towards empowering women entrepreneurs and encouraging participation of women in the real estate sector and allied fields, NAREDCO MAHI will strive to create an environment where women in real estate sector can come together, to share experiences, harness their skills, draw on their resources, influence, grow and bring about lasting change. NAREDCO MAHI will ensure active engagement of members with other stakeholders in the sector and work towards the development and growth of the sector, with due recognition for the contribution of women in India’s real estate journey.

Talking of major changes in the Indian real estate sector, he said that the RERA Act has brought about confidence towards the sector. “There is going to be a great development in the real estate front in the country. A lot of young management professionals are now entering the sector and more women should follow suit,” Mr. Mishra said.

On the potential opportunities in the sector, he said that in the next 30 years there will be great growth of urbanization, construction and infrastructure development and there will significant requirement of skilled people, he said.

Mr. Rajan Bandelkar, President, NAREDCO India said “We would strive to mobilize women power at NAREDCO MAHI this year and garner more visibility for the organization.”

The newly elected National President of realty body also noted that “the initiative comes at a crucial time, as it would help more and more women entrepreneurs shed the impact of the pandemic and support economic recovery. The members of the newly-formed women arm are likely to avail unparalleled business growth.”

“Better gender diversity and representation would not only unlock several opportunities for Indian women, but will also accelerate our great country’s growth momentum and help achieving the target for an Atmanirbhar Bharat.” she said.

The activities of the newly formed wing would range from mentoring, networking and access to capital for women entrepreneurs to inspirational talks from women in real estate sector and their journeys. The NAREDCO MAHI members will have access to exclusive training programs and opportunities to sharpen their presentation and business skills along with availing great networking opportunities.

The move is part of NAREDCO’s continuous efforts towards support for women entrepreneurs among its other initiatives. It acknowledges that such moves are not just for empowering a significant part of the population, but as history shows women have always played a crucial role in every aspect of Indian society and this move only will propel it’s greatness further.

University of Southern California: New study shows that different types of cancers are likely to spread to specific areas of the brain