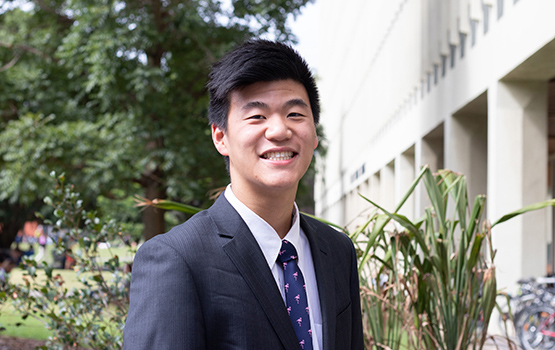 Monash Commerce student and Gen-Z educator, Nathaniel Diong was one of four young Aussies recognised as the 2021 Young Australian of the Year, out of thousands of nominations across Victoria.
Nathaniel Diong was recognised for his transformative work at Future Minds Network, where he has helped 11,000 youth avoid poverty through employment education.
During the COVID-19 pandemic, Australia’s youth unemployment rate rose up to 14.5% prompting Nathaniel to run $90 000 worth of subsidised programs to support global youth education and retraining.
With half of the world’s youth who will end up in jobs that haven’t yet been created and 675,000 young people under 25 unemployed or underemployed, a Monash University student is hoping to #CHANGEIT.

Three years ago, and aged just 16, Nathaniel Diong (BCom/ Global Studies), was called to make a difference. He created the social enterprise, Future Minds Network, to help young Australians build the essential interpersonal, communication and practical skills to not only enter the job market, but also create new career pathways.

Nathaniel and his team of 20 volunteers have since educated, inspired and equipped more than 11,000 youth across three continents. Nathaniel believes employment education is crucial to help youth to avoid falling into structural unemployment and poverty after graduation.

Future Minds Network runs hundreds of engaging programs for high schools and universities each year. Students are taught how to build start-ups and impact-driven business, over the span of two days all the way to two months.

Through this program, students are empowered to solve big problems, practise human skills like communication and problem solving, and create their own financial freedom. Above all, they get to create their own jobs for the future.

Students from more than 50 cultural groups across the world have completed his programs – many of whom have built their own companies, got speaking engagements at TEDx, and launched not-for-profits across Australia.

“We’re living in a global youth unemployment crisis and in the next 10 years, 2.8 million young Australians will need to be significantly reskilled,” Nathaniel said.

“Youth unemployment is more than just not having a job. It has drastic impacts on people’s mental health, relationships with other people, as well as social costs, such as homelessness.

University of the Highlands and Islands: University holds…

“Originally, Future Minds Network stemmed from a place of helplessness. When I was 10, I used to count how many people died every second, minute and hour, and spent many hours crying. I wanted to change it but I didn’t know how.”

During COVID-19, Nathaniel ran $90,000 worth of subsidised programs to support educators through remote learning and inspire youth. This included virtual summits for ‘teenpreneurs’ in the UK, global hackathons and career-readiness workshops across Australia.

He also recently linked 10,000 disadvantaged women in tech with employment at a virtual careers’ fair.

For his outstanding efforts investing in youth futures, and from thousands of nominations, Nathaniel was selected as one of four nominees for the Victorian Young Australian of the Year 2021. He was also a Finalist for Youth Champion at the Melbourne Awards, which was announced on Saturday 21 November.

Nathaniel says he’s delighted to be recognised for these prestigious national honours, but is more passionate about the exceptional young people he gets to work with on a day-to-day basis.

Despite having his hands full with undergraduate study and being the CEO of Future Minds Network, Nathaniel is also an international start-up mentor; sits on eight boards of not-for-profits; and represents the UN Centre for Trade and Development (Youth Action Hub) as Vice-Coordinator for Australia.

In 2021, Nathaniel is looking to scale back his efforts internationally to target those most vulnerable to long-term social, economic and employment hardship locally.

“Monash gives you more opportunity than just the degree. It’s given me the opportunity to work internationally whilst continuing to study locally. I’m inspired to help others and reverse the increasing trend of youth unemployment across Australia,” he said.

University of the Highlands and Islands: University graduates showcase work at Film…