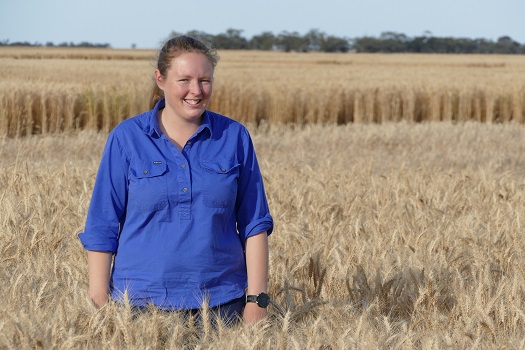 Monash University student Kate Maddern has won the prestigious 2021 Victorian Rhodes Scholarship. She’ll travel to Oxford University in September 2021 where she hopes to enrol in the BA (Philosophy, Politics and Economics) with senior status.

The prestigious scholarship was announced today by Her Excellency, the Hon. Linda Dessau AC, Governor of Victoria, at Government House.

Kate graduated from Monash in 2019 with a Bachelor of Science Advanced – Global Challenges (Honours) degree, majoring in Ecology and Conservation Biology.

She is a passionate advocate for advancing sustainable food production and is focused on the role she can play in enabling agriculture to become a leading force recognised for its sustainability and advances in technology, while continuing to produce food and fibre for all.

Kate has held leadership roles while a student at Monash and is currently a volunteer firefighter in the Sandsmere CFA brigade.  She has actively participated in squash and netball clubs at school, Monash and the local community, including as a volunteer netball umpire.

“Learning that I’d won the 2021 Victorian Rhodes Scholarship was incredible – it opens up a whole new world of opportunity to better understand how markets and policy influence Australian agriculture and the effects this has on farmers,” she said.

“Growing up on a sheep and grain farm in the Wimmera, farming with a focus on sustainability is an issue close to my heart – with this once-in-a-lifetime opportunity my goal is to apply the education, skills and experiences that come with a Rhodes Scholar towards a more sustainable future for Australia’s agriculture industry.”

Another Monash student, Nicholas Young, was one of two runners up who will now be considered for one of three Australia at large scholarships. Nicholas will graduate from Monash in 2020 with a double degree, Bachelor of Laws (Honours) and Bachelor of Arts, majoring in International Relations.