Stanford Medicine’s Clinical Virology Laboratory today launched a diagnostic test for the monkeypox virus that has been identified in 42 countries and several U.S. states, including California. The test will accelerate accurate diagnoses and inform public health efforts aimed at stopping the spread of the virus.

Although the disease is normally found only in Africa, or in people who have recently traveled to Africa, the World Health Organization reported that over 2,100 people in 42 countries have been diagnosed with monkeypox as of June 15, nearly all during the past two months. As of June 17, the CDC reports 24 confirmed monkeypox cases in California.

The monkeypox virus is much less easily transmitted than the virus that causes COVID-19: The CDC reports that the threat to the general U.S. population is considered low. It is not related to the virus that causes chickenpox, although physicians who suspect a patient’s rash may be monkeypox may wish to order tests to rule out chickenpox and herpes.

“We don’t expect the number of positive monkeypox tests to approach anywhere near the number of SARS-CoV-2 positives we have seen during the COVID-19 pandemic,” said Benjamin Pinsky, MD, PhD, associate professor of pathology and of infectious disease at Stanford Medicine. “But it’s important to have this test available for clinicians and their patients to guide their care and to aid public health surveillance and prevention efforts.”

Currently, samples from suspected cases are sent first to a network of public health and government laboratories that are part of the Centers for Disease Control and Prevention’s Laboratory Response Network. Those that test positive are then sent to the CDC for another round of tests to confirm the diagnosis.

But experts have warned that this two-step system for diagnosis is cumbersome and doesn’t give doctors and public health experts the timely information they need to care for patients and block transmission of the virus. An in-house test will streamline the process, Pinsky said. 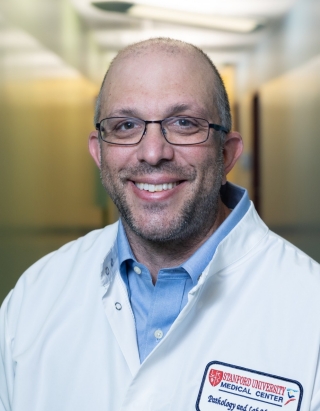 “Physicians can order the test through the electronic medical records as they would any other diagnostic test from our laboratory,” Pinsky said. “We expect a turnaround time of about 24 to 48 hours, so doctors will have the results they need to provide appropriate care for their patients.”

The monkeypox virus is a member of the Orthopox family of viruses. Other family members include the viruses that cause smallpox and cowpox.

Unlike the virus that causes COVID-19, monkeypox is not new. It was identified in research monkeys in Denmark in 1958, and the first human case was identified in 1970. The virus is usually found in Africa, and until now has thought to be primarily spread to humans after contact with infected animals such as rodents and monkeys living in tropical environments. It can be spread from person to person through close skin contact, through large respiratory droplets, and by touching an infected person’s bedding or towels. But until May, human-to-human transmission was relatively infrequent.

People with monkeypox typically have a characteristic rash that erupts one to three days after experiencing a fever, head and muscle aches, swollen lymph nodes, and exhaustion. According to the WHO, about 3% to 6% of infected people have died in the years preceding this outbreak. One death has been reported so far in the current outbreak.

The WHO states that the unexpected appearance of monkeypox in several regions in people who were not known to have traveled from Africa suggests there may have been undetected transmission in Europe and the United States for some time. Recently diagnosed people have been primarily men who have sex with men who have also reported recent new or numerous sexual partners, suggesting sexual transmission of the virus.

Although the method and degree of spread of the monkeypox outbreak is novel, there are mitigation measures, including a vaccine that may provide up to 85% protection from monkeypox when given prior to exposure. In January the European Medicines Agency approved the use of an antiviral medicine developed to treat smallpox, monkeypox and cowpox.

The Stanford Medicine test is similar to the one Pinsky’s laboratory launched in early March 2020 at the start of the coronavirus pandemic. Samples from the patient — nasal or throat swabs in the case of COVID-19 or swabs from the characteristic lesions that form on the skin of people with monkeypox — are mixed with short pieces of DNA that attach themselves to a specific stretch of viral genetic material present in the sample. The mixture is placed into a PCR (polymerase chain reaction) machine that amplifies and detects the presence of the virus.

“We want to be prepared in case these patients come to our hospitals and clinics,” Pinsky said. “The availability of this test helps us quickly provide appropriate care and facilitates the rapid identification of close contacts who may be at risk of contracting this infection. I’m much more confident than I was with COVID-19 that we can control this outbreak, but I’m also a worrier and I want us to be prepared.”

University of Massachusetts Amherst: A Mile Underground in the Quest for Dark Matter

University of Massachusetts Amherst: Researchers Seeking Volunteers for a Study on Muscle Fatigue