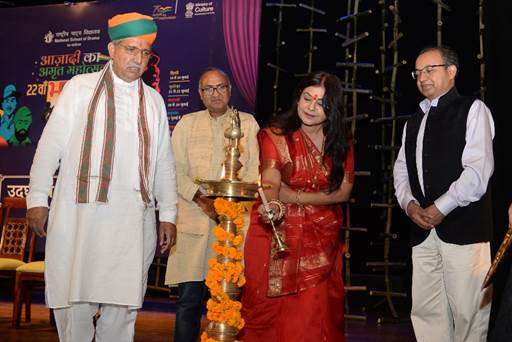 New Delhi: Ministry of Culture, Government of India is celebrating India’s 75th year of Independence as Azadi ka Amrit Mahotsav. On this occasion, National School of Drama (NSD), New Delhi is organizing a festival “Azadi Ka Amrit Mahotsav- 22nd Bharat Rang Mahotsav, 2022 (Azadi Segment)” to remember and pay tribute to our freedom fighters, under “Azadi Ka Amrit Mahotsav 2022” from 16th July to 14th August 2022. The opening ceremony of the festival was inaugurated by Minister of State for Parliamentary Affairs and Culture, Govt. of India Sh. Arjun Ram Meghwal. Ms. Malini Awasthi, Padma Shree Awardee, Renowned Indian folk Singer and Sh. Arvind Kumar and Director, Ministry of Culture, were among those who were present on the occasion .

Addressing on the occasion , Shri Arjun Ram Meghwal stated that there are many unsung heroes of freedom struggle who have actively participated in the freedom movement, yet have been unable to become a part of our history of freedom struggle. Giving an example , he also mentioned that in the year 1913 in Maangarh, the tribes of that region have been brutally tortured and killed but it is not a well highlighted incident. The theatre activists and the National School of Drama should come forward to prepare plays based on those incidents switch should be performed across the country to make the citizens aware of such heroes and bring out their stories of bravery and courage, he added.

Ms. Malini Awasthi in her address mentioned the various folk songs that were being sung across large part of India in the praise of the freedom fighters. Many of such songs were banned by the British Government but folk artists kept on singing them and thus taking the stories of unsung heros to the next generation. Prof. (Dr.) Ramesh Chandra Gaur, Director, National School of Drama, presided over the festival.

The opening ceremony followed by the performance of the play “Aranyadhipati Tantia Mama” Directed by Sh. Bansi Kaul.