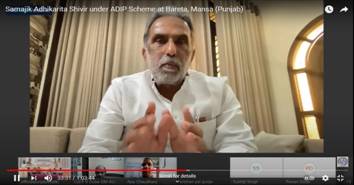 Addressing on the occasion Minister said thatunder the leadership of Prime Minister, the department has done unprecedented work for welfare of Divyangjan consistently during the years. Speaking about the need of conducting such distribution camps, Minister said that organizing such camps helps in spreading the awareness about the welfare schemes run by Central Government for Divyangjan as also to empower them and bring them into the main stream of the society.

“Unique ID for Persons with Disabilities” project is being implemented with a view of creating a National Database for PwDs, and to issue a Unique Disability Identity Card to each person with disabilities, Minister informed that the UDID scheme has been implemented in all the states across the country, Persons with disabilities will not need to make multiple copies of documents as the card will capture all the necessary details and is valid throughout the country,the UDID card will be the single document of identification, verification of the disabled for availing various benefits in future, about 57 Lakh 95 Thousand UDID cards have already been issued.He further informed that, scheme for implanting cochlear devices for children who are deaf by birth and can’t speak, has been implemented by ministry with the provision ofRs. 6 lakh for each such child.He urged public representatives and administration that list of such needy children in Mansa District may be provided to the Ministry so that eligible beneficiary may get the benefit of the central run scheme for Cochlear Implant.

Total 1105 number of beneficiaries of Mansa District were pre-identifiedwith 2253 number of assistive appliances of different category valuing worth of Rs. 109.59Lakh.Such assistive devices will be distributed free of cost under the ADIP Scheme among the beneficiaries by organizing series of distribution camps at block levels.The identification and registration of divyangjanbeneficiaries was done in the month of February this year by ALIMCO in association with District administration Mansa, Punjab.

The distribution camp wasorganized by Artificial Limbs Manufacturing Corporation of India (ALIMCO), Kanpur working under the aegis of Department of Empowerment of Person with Disability (DEPwD), Ministry of Social Justice and Empowerment (MoSJE), Government of Indiain association with District administration Mansaas per new approved Standard Operating Procedure(SOP) issued by Ministry in wake of COVID 19 pandemic.