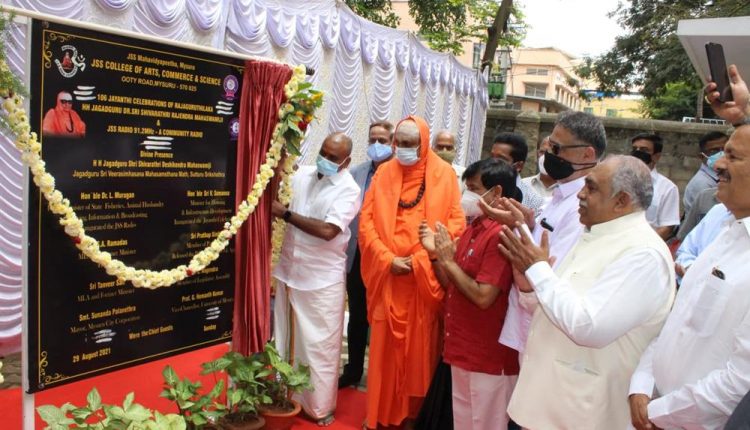 New Delhi: The principle of ‘By the people, of the people, for the people’ is perfectly reflected in Community Radio stations, said Dr. L. Murugan, Hon’ble Union Minister of State for Fisheries, Animal Husbandry, Dairying, Information & Broadcasting at the inauguration function of a Community Radio Station (JSS Radio 91.2 MHz) on the occasion of the 106th Jayanthi Celebration of His Holiness Jagadguru Dr. Sri Shivaratri Rajendra Mahaswamiji at JSS Mahavidhyapeetha, Mysuru, in Karnataka.

“As the media of root level people of the disadvantaged areas, Community radio has become popular in recent years and it has opened a new arena for both the policymakers as well as grassroots people to be involved in the development process of their community”, Hon’ble MoS said.

Highlighting the contribution of Sri Suttur Math, Hon’ble MoS said that it is one of the outstanding religious centres of South India and is known for its immaculate service to humanity, in every possible way.

With it’s more than one thousand fifty years of fruitful existence, Sri Suttur Math has been the centre for a socio-spiritual-health and educational hub for thousands of people across the country and abroad, he added.

India Education Diary Bureau Admin Apr 25, 2022
Varanasi : With an aim to empower and facilitate students who are enrolled with BHU and face hardships in course of…

University of Warwick: New book centres the contribution of British…

University of Warwick: Reducing patients’ breathing efforts could be…

University of Amsterdam: Designing the perfect piece of chocolate