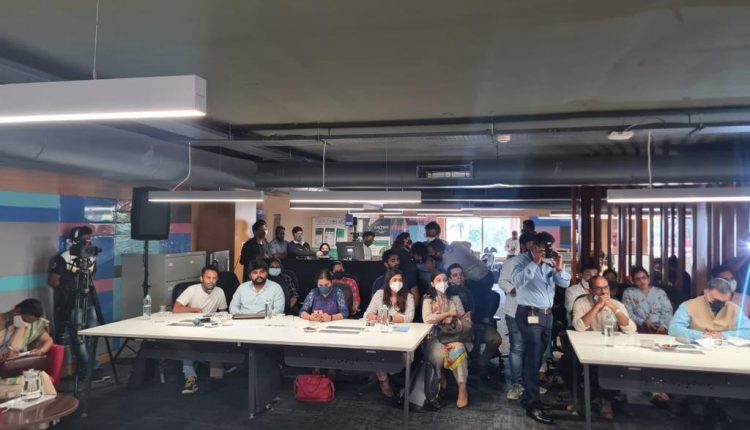 New Delhi: Rajeev Chandrasekhar, Minister of State for Electronics & Information Technology, celebrated today Diwali with Bangalore based startups. In a programme, organized jointly by NASSCOM and STPI in Bangalore, the Minister interacted with startups knowing about their journey, the challenges they face and their suggestions on how to further strengthen the Government’s support to the startup programme.

He had an engaging and interactive conversation with DeepTech, TechWe and STPI IoT OpenLab startups based out of Karnataka along with industry leaders. The Minister also viewed the game changing solutions of the startups and the people they have impacted in their digital inclusion journey. Deliberation were also held on ‘Strategies to develop the Deep Tech ecosystem in India by 2026’.

Addressing the gathering, Rajeev Chandrasekhar spoke about the vision of Prime Minister Narendra Modi on the Digital India Programme. He mentioned that “ The Hon’ble PM launched the Digital India Programme in the year 2015 with 3 clear objectives. It was to leverage technology for – i) transforming the lives of people ii) expanding economic opportunities iii) creating capabilities in certain strategic technologies. He mentioned that the way the Indian economy has bounced back post the pandemic, a lot of that has to do with the strong foundations laid by Hon’ble PM under the Digital India programme. People in the remotest part of the country could be reached with the click of a button and each and every penny was directly transferred into the accounts of beneficiaries.

Citing the tremendous expansion in the Digital economy over the last 18 months, Rajeev Chandrasekhar remarked that “There has never been a better time for the startups than Now. The startups have a Universe of Opportunity and the World is now looking for new trusted Suppliers like India.” He added that it is the priority of the Government to digitalize all its services and this shall further result in creating additional demand.

Rajeev Chandrasekhar also stressed upon the need to spread the entrepreneurship to smaller cities and to replace the Outsourcing Model with the Co-Development/ Co-Working Model to support the next stage of Entrepreneurship.

Concluding his address, Rajeev Chandrasekhar re-affirmed the Narendra Modi Government’s support to the startup ecosystem and assured them that the Government is willing to play an active role in assisting them with all necessary policy support and by facilitating market linkage.

The interactive session was organized in informal settings to encourage open and free exchange of ideas and experiences.It lasted over an hour & saw active participation from the entrepreneurs who shared their experiences, challenges and suggestions for making the startup ecosystem more vibrant. The session also featured women based startups who were encouraged by Ministry of Electronics & Information Technology.

The interactive session concluded with a lunch wherein the entrepreneurs, startups relished local delicacies with the Minister and exchanged Diwali greetings.