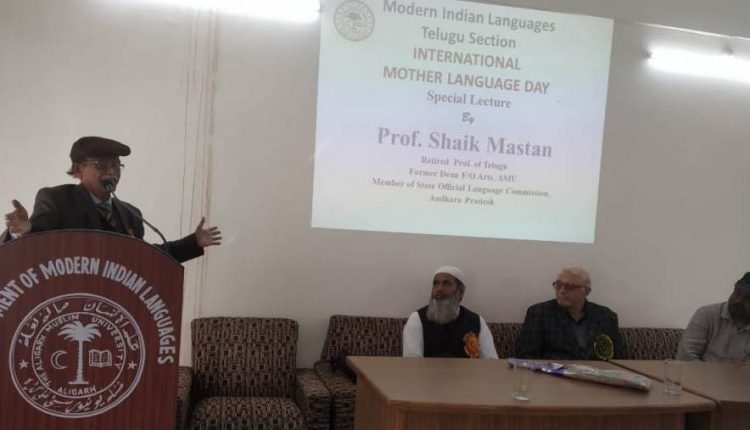 Aligarh: “Mother tongue is the language of our heart and mind and clearly there is more comfort expressing in it. The native language forms one’s identity. People are recognised by the language they speak and the culture they follow,” said Prof Shaik Mastan, former Dean, Faculty of Arts, Aligarh Muslim University (AMU) and currently a member of the Andhra Pradesh State Official Language Commission.

He was delivering a special lecture organised to mark the ‘Mother Language Day’ celebrations by the Telugu section, Department of Modern Indian Languages, AMU.

Mother tongue is not just a language, but it is a culture and identity that one has in the society, he said adding that every language spoken in the world represents a special culture, melody, color, and asset and to everyone the mother language is certainly one of the most precious treasures.

It is a duty and responsibility to preserve native languages and pass them down from generation to generation, emphasised Prof Mastan.

“India is multi-lingual and it is imperative to preserve the diverse heritage, ethos and native languages, which play a vital role in the development of personalities and understanding of the world around us,” said Prof Mushtaq Ahmad Zargar, (Chairman, Department of Modern Indian Languages) in the presidential address.

He pointed out that Department of Modern Indian Languages is unique in terms of multi-lingual fraternity.

This occasion reminds us how special and beautiful our mother tongues are, said Prof A Nujum, Malayalam Section.

Dr Sabahuddin Ahmad (Officiating Chairman, Department of Linguistics) stressed the importance of mother tongue and why Language has been called the greatest human invention.

Prof Reshma Begum (Hindi Section, Women’s College) spoke on the importance of linguistic and cultural diversity and multilingualism. Dr Shagufta Niaz conducted the programme and Dr Nazish Begum extended the vote of thanks.

Teach For India Fellowship: The movement for an India filled with love and compassion

India Education Diary Bureau Admin Jan 19, 2022
JAMMU : To ensure and streamline the supply of quality fertilizer to the farmers, a team of officers led…

DIPR Rajouri spreads awareness on CAB through announcements in rural…