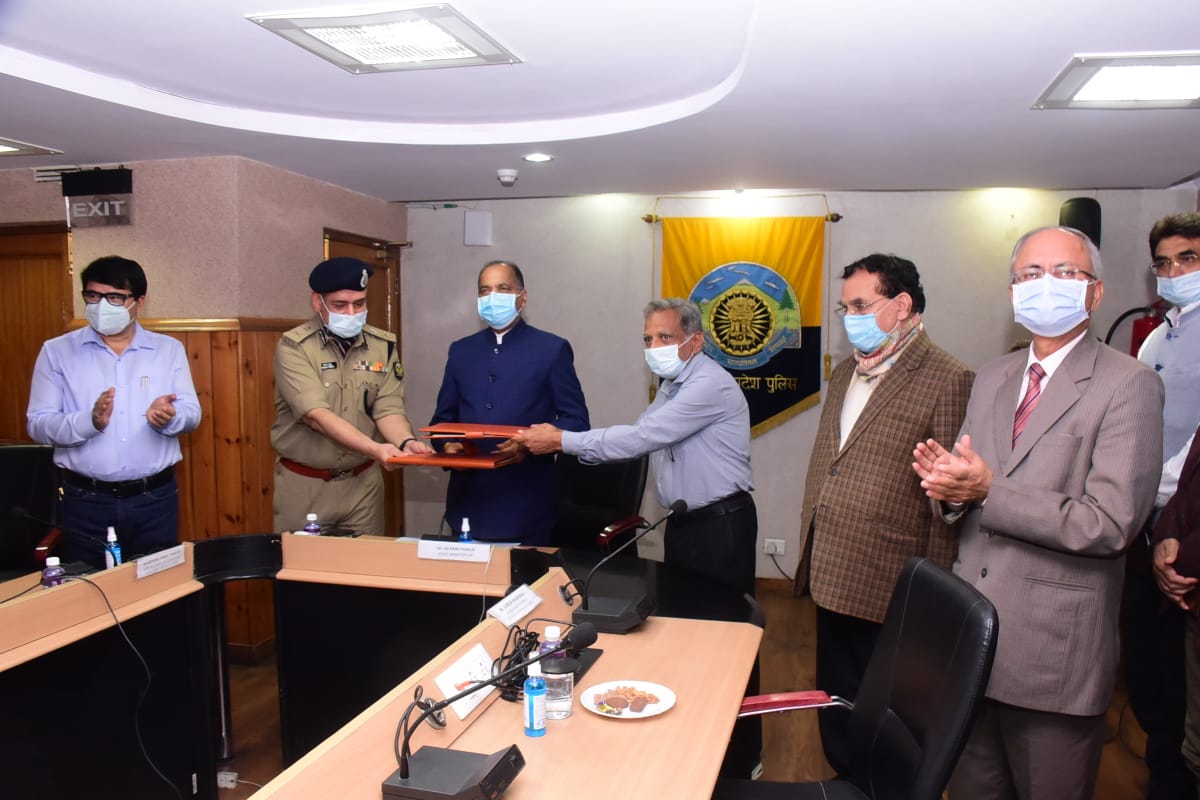 Shimla: A Memorandum of Understanding (MoU) was signed between Himachal Pradesh Police and Indian Institute of Technology (IIT), Mandi in the presence of Chief Minister Jai Ram Thakur here today to set up an institutional mechanism to facilitate the Police Personal in updating their knowledge. Chief Minister also inaugurated Himachal Pradesh CCTV Surveillance Matrix and Command Centre at State Police Headquarters which had been established in a record time of 65 days despite Covid-19 pandemic.

Speaking on the occasion, Chief Minister said that the objective of the MoU was to facilitate the police personnel to update their knowledge about new technologies, geographical and temporal analysis of crime and public order, prediction of period crime trends, traffic management, e-challaning, beat patrolling system, threat and security analysis, cybercrime, cyber forensics and cyber security. He said that the collaboration would be based on research and development activities and capacity building which would involve police officers, IIT faculty, researchers and students.

Jai Ram Thakur said that it would also offer exposure to IIT students about police functioning and internships at various units of Himachal Pradesh Police. He said that this would also facilitate interaction of students with police officers to enhance exposure to ideas of crime trends, detection, prediction, analytics and learning about technological matters. He said that this would also update the knowledge of police officers particularly of Investigation Officers on technological advancement and its application in practical policing. The collaboration will provide improvement in police working especially with respect to systems, protocols, technologies and training imparted at Police Training Centre, Daroh and other units in Himachal Pradesh Police, he added.

Chief Minister said that this CCTV Surveillance Matrix system would work on the principle of ‘Stopping crime before its starts’ by integrating all its components. He said that the aim of this system was to focus on predicting crimes, offenders, perpetrators, victims, places and time.

Jai Ram Thakur at present there were over 19,300 CCTV cameras installed all over the State and these were very helpful in prevention and detection of crime, investigations, traffic management, manpower optimization and improving efficiency in police service delivery. He said that keeping in view the about 70 lakh population of State ideally 68,000 cameras were required to be installed all over the State. He said that the State Government would consider to install these cameras in a phased manner. He said that this would not only check the crime but also help in effectively managing traffic in the State.

Chief Minister said that four command centres had been functioning in Kullu, Sirmour and Kinnaur and Baddi Police districts effectively and efforts were being made to establish district level command centre in other districts of the State as well. He said that it was the need of the hour to equip police force with latest technologies to cope up with the situation as anti social elements were also using technologies. He said that police personnel need to be a step ahead in technology to curb crime in the State.

Urban Development Minister Suresh Bhardwaj commended efforts of DGP Sanjay Kundu and his team for upgradation of the police force. He said that it would not only help in effective policing but also ensure optimum use of modern technology to control crime. He said that adequate funds would be provided for establishing of Command Control Centres in the upkeeping Smart Cities of Shimla and Dharamshala.

Chief Secretary Anil Khachi appreciated the efforts of the State Police for adopting new technologies for its smart functioning.

Director General of Police Sanjay Kundu said that State Police would hold regular academic conferences, workshops and discussions involving the State Police, technological experts, IIT faculty, researchers and students. He said MoU would help in simplifying the investigation of IT related cases and to formulate a compact protocol for investigation.

He said that the initiative of the police department would not only check crime against women and children but would also ensure congenial environment in the State. He said that more CCTV cameras would be installed in major religious places which would help in effective management of crowd.

ADGP Law and Order Ashok Tiwari presented vote of thanks.