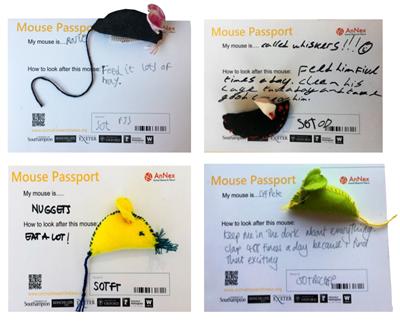 The Mouse Exchange, developed and delivered by the University of Southampton, has won an Openness Award from Understanding Animal Research, a non-profit organisation that explains why animals are used in medical and scientific research.

This unique project mixes science with crafting and aims to improve public understanding of the origins of animals used in research and testing.

At the heart of The Mouse Exchange is a simple creative activity using felt and other craft materials to make a mouse. Families and groups of friends are guided through the process of making a mouse, constructed of felt and stuffing, and adding character – nose, whiskers, tail and felt ears – to their creations with stitching. Participants then complete a ‘passport’ for their mouse which includes a unique barcode, naming the mouse and care instructions.

Conversations we have held range from the breeding and making of laboratory mice; the relationship between humans and mice; the complex roles that mice play in research as something to be cared for, to be used, and to be sold.

A majority of participants wanted to rehome ‘their’ mouse themselves after they had made it, and enjoyed giving it a name and explaining what their mouse liked (‘cuddles, carrots, green grapes, love’). This provided an opportunity to discuss how decisions are made around rehoming of laboratory animals. “Conversations begin organically and spill out beyond family and friendship groups. Most participants were unaware of laboratory animal rehoming and had not previously considered where laboratory animals had come from,” said Dr Emma Roe. “Although, some guessed that these animals might have been taken from the wild; others guessed that they were bred in laboratories. None were aware of commercial suppliers.”

“We are delighted how the crafting approach encourages the sharing and exploring of experiences and perspectives about animal research,” Dr Emma Roe continued. “The emphasis of much public discussion on animal research is about its acceptability. With the Mouse Exchange activity we do not enter into this debate. Instead we are led by the curiosity of our participants when we discuss the sourcing of laboratory animals and their care, in biomedical research”.

Dr Sara Peres added: “It was clear that participants approached the topic of laboratory animals personally, and that feelings of attachment, connection and ownership grew as they created the mouse with their hands, with most of the mice being taken directly home.

“By allowing people to enjoy the experience of crafting a mouse in a space that invites questions about laboratory animal lives, it gave a chance to explore a world often inaccessible from public view and its questions.”

Some participants described how the workshop was a “therapeutic” experience in and of itself, recalling memories of childhood and of “sewing boxes” which led to discussions on how the act and art of making and caring can be connected. Transparency and visibility were also discussed along with activism and media coverage, and how these can negatively impact on animal welfare and those who care for the animals.

The University of Southampton has a long-standing track record in complying with all legal requirements involving animal research and is amongst a number of organisations in the UK signed up to the Concordat on Openness on Animal Research.

Animal research at Southampton has led to scientific breakthroughs in several key areas of health research including cancer however the University seeks to use alternative research methods where possible.