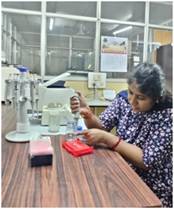 New Delhi: We may be close to a vaccine to boost the immune system of rice. A scientist has uncovered the mechanism by which a bacterium called Xoo (Xanthomonas oryzaepv. oryzae) that causes a serious bacterial leaf blight disease in rice interacts with rice plant and cause disease.

Dr Tayi Lavanya, a recipient of DST-Inspire Faculty Fellowship, instituted by the Department of Science & Technology, Govt. of India, working in Centre for Plant Molecular Biology (CPMB), Osmania University, Hyderabadalong with her research group is working to identify and develop few molecules which are derived from either the Xoo bacterium or from the infected rice cell walls.

The team is developing new disease control strategies which they can use as vaccines that activate the rice immune system and provide resistance to rice plants from subsequent infections by pathogens.

The team led by Dr Lavanya carried out biochemical and functional studies on plant cell wall degrading enzymes secreted by Xoo, which has provided key insights into the mechanisms by which the Xoo pathogen interacts with rice plant and cause disease.

Using the leads obtained from her Ph. D work, Dr Lavanya, along with her research group have zeroed in on few molecules derived from either the Xoo bacterium and from infected rice cell walls which they hope to develop into vaccines.

Currently, Dr. Lavanya’s group is working on a cellulase protein secreted by Xoo. This cellulase protein has the features of a typical vaccine as it is a potent elicitor of rice immune responses. Pre-treatment of rice plants with this protein provides resistance to rice against subsequent Xoo infection.

So far, improving the resistance of rice plants by introducing Resistance “R” genes has been the best way to control this disease which involves breeding or gene manipulation techniques that are laborious and time-consuming. Also, the introduced of “R” genes provide only race-specific resistance that will prevent infections by only specific strains of Xoo. But the elicitor molecule that will be identified in this work will have the potential to induce a broad-spectrum resistance, which will be effective not only against Xoo but also against other pathogens.

According to Dr Lavanya, this study will reveal novel elicitors of rice defence responses and provide new knowledge about the basic aspects of plant-pathogen interactions that might lead to new ways of reducing yield losses for a crop that at least half of the world’s population depends on.

Prof. Ashutosh Sharma: Vaccines for corona virus are in advanced phases of trial, and India has the capacity to supply the vaccine to a major part of humanity

iednewsdesk Apr 7, 2022
The crosstalk between immune cells and tumor cells within tumor microenvironment crucially determines the fate of…

University of Reading: Reading tops UK for Agriculture in 2022 QS…

University of Exeter: Success for Exeter subjects in influential…

University of Exeter: Exeter academic warns of ‘funding issue’ over…