Employees of the Department of Entomology, Faculty of Biology, Moscow State University analyzed in detail the nature and mechanism of symmetric folding and subsequent spreading of wings found in the smallest beetles from the family of featherflies (Ptiliidae) using the example of a widespread species of this family, Acrotrichis sericans. The article was published in Scientific Reports.

The study helps to understand the changes taking place in winged insects during miniaturization – an evolution towards a strong decrease in size. The results of the work can be used in robotics to create miniature aircraft capable of folding wings. While some of the little flying robots already know how to do this, they are still giants compared to the feather-wing beetles. However, it is possible that engineers working on the miniaturization of such devices will someday be able to design and manufacture artificial likenesses of the smallest beetles, comparable in size to these amazing natural samples. 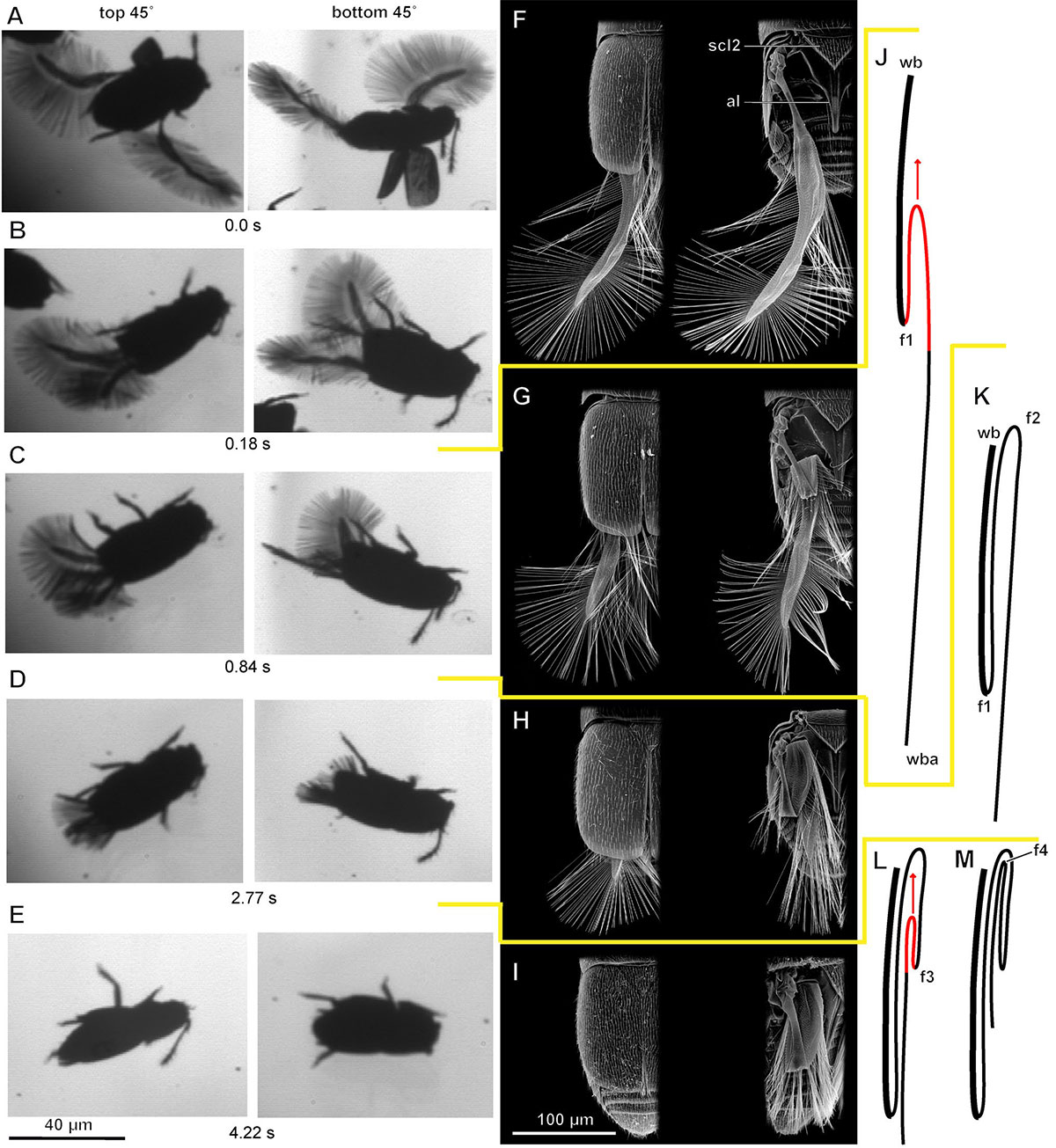 The feather-wing beetle folds its wings: frames of high-speed video shooting in infrared light at different angles (A – E), different stages of folding the wings under a scanning electron microscope (F – I, on the left, the same stage with the elytra removed) and schematic longitudinal sections (J – M ).
Drawings by Petr Petrov. Symbols on the first and second: scl2 – scutellum of the mesothorax, al – alacrista (process of the scutellum of the metasternum), wb – base of the wing, wba – apex of the wing plate, f1 – f4 – folds from the first to the fourth.

The beetles caught in the vicinity of the Zvenigorod Biological Station of Moscow State University were studied using scanning electron, confocal laser and light microscopy, as well as high-speed video filming and three-dimensional computer modeling.

“In contrast to the asymmetrically folding wings of larger beetles from other families, as well as from representatives of the subfamily Nossidinae of the same family Ptiliidae, which has not gone so far along the path of miniaturization, beetles from the genus Acrotrichis, like most members of the family, including the smallest known science of free-living (non-parasitic) insects, fold their wings symmetrically. It is known that miniaturization often leads to the appearance of asymmetric structures, for example, in the nervous or reproductive system. Our study sheds light on the only noted case of a return to strict symmetry during miniaturization. The beetles studied by us fold their wings, packing them under the elytra through a series of abdominal movements, and straighten them passively, lifting the elytra,Pyotr Petrov , Senior Researcher, Department of Entomology, Faculty of Biology, Moscow State University.

The authors of the article showed that the minimum duration of wing folding in the studied species is 3.5 s, but the reverse process occurs fundamentally differently and much faster: the minimum duration of wing spreading recorded in this species was only 0.038 s – at present, this is a record-breaking fast wing spreading among the beetles. At the same time, the ratio of the folding of the wings (the ratio of the length of the extended wing to the length of the folded) turned out to be in this species, on the contrary, a record low – 3.31 (if you measure the length of the wing without long bristles, which in perwing, like in most other microinsects, border plate along the periphery).

“Miniature forms arose in the course of evolution in several different orders of winged insects. Most of these microinsects are characterized by the so-called ptylopterygia – narrow wings bordered by relatively long peripheral setae. Owners of such wings fly using a special mechanism, which we are currently studying in detail. The smallest coleoptera, belonging to the perwing family, are unique among microinsects for their ability to fold such wings. In the future, we plan to prepare a comparative analysis of folding and unfolding of wings in representatives of different groups of feather-winged beetles and to restore the evolution of the mechanisms underlying these processes, ”added Alexey Polilov, head of the Department of Entomology, Faculty of Biology, Moscow State University .

TSU is 2nd in Russia in the THE Arts & Humanities ranking