Elena Temereva, a leading researcher at the Department of Invertebrate Zoology, Faculty of Biology, Moscow State University, with a master’s student at the Laboratory of Morphology, Ecology and Systematics of Invertebrates, Pyotr Kuznetsov, revealed previously unknown morphological features of numerous marine benthic organisms – echiurids. The work was published in the journal Zoology and supported by a grant from the Russian Science Foundation.

Echiurids are marine benthic organisms that are extremely numerous in the most diverse areas of the World Ocean. In appearance, Echiurids resemble a thick sausage with a long flat outgrowth at one end of the body. The flat outgrowth is the trunk. It is found in most echiurids and is used by them to collect food from the surface of the seabed. The animal’s body is hidden between stones or in natural passages in stones and other calcareous substrate. Echiurids also settle on soft ground, in which they are able to dig deep holes. These burrows are home to a very unusual and interesting fauna of unicellular and multicellular organisms, for which echiurids become the owner of the dwelling. As the deep-sea studies of recent years have shown, echiurids are numerous at great depths – from 1000 to 5000 meters. It turns out that even at great depths, the density of echiurids settlements can be simply fantastic – this is evidenced by storm emissions, containing thousands and thousands of these animals. The large abundance of echiurids makes them an important component of marine benthic communities and, to some extent, determines the composition and functioning of these communities. 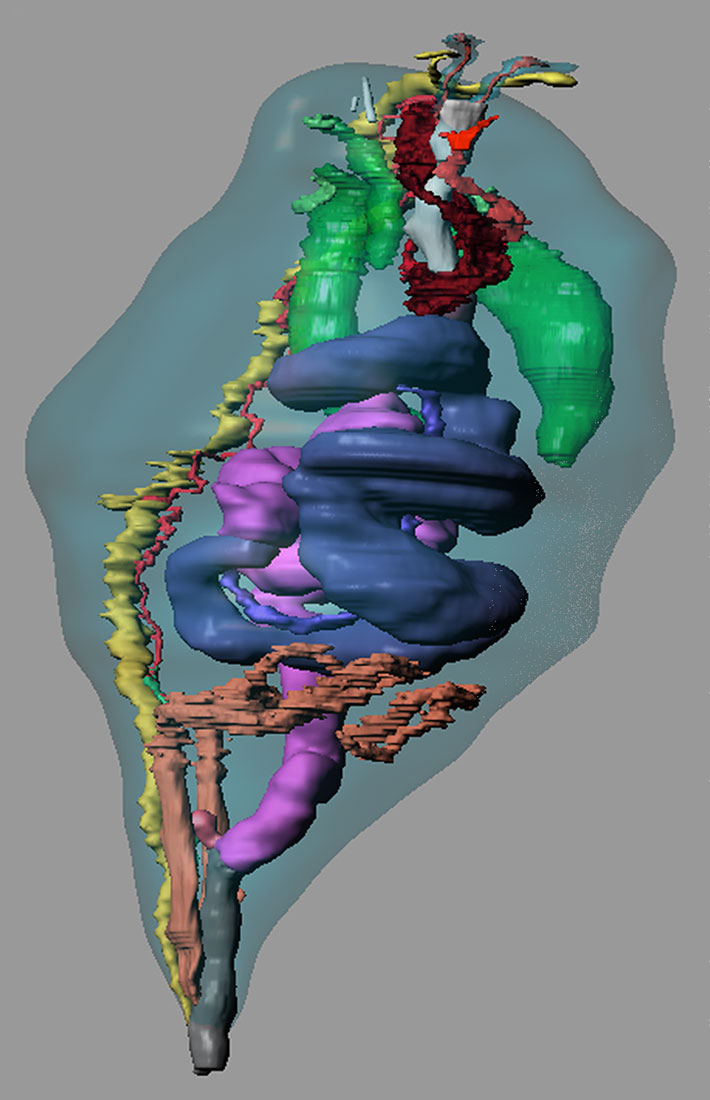 Complete 3D reconstruction of all organ systems of Lissomyema mellita. The front end of the trunk is removed

“Due to the secretive lifestyle, we know little about the biology of these animals: how they move and whether they change their place of residence, how they feed and what is the position of the trunk on the ground during feeding, how food particles are sorted and whether it occurs at all, how they reproduce and many, many other things , ”said Elena Temereva , leading researcher at the Department of Invertebrate Zoology, Faculty of Biology, Moscow State University.

Since direct observation of echiurids is a difficult, and sometimes simply impossible (for various reasons) task, the methods of morpho-functional analysis come to the aid of researchers, when, studying the organization of various organ systems, we can assume how these systems work and how the animal lives …

Employees of the Department of Invertebrate Zoology, Faculty of Biology, Moscow State University, for the first time for echiurids, conducted a detailed study of the anatomy of these animals using scanning electron microscopy, histological techniques, and 3D reconstruction using complete series of sections. Previously unknown features of the organization, trunk, integuments, digestive, circulatory and reproductive systems of organs were revealed.

“The features found show that our knowledge of marine life is extremely scarce. Moreover, the anatomical features of specific representatives often do not correspond to the schemes and generalizations that are made for the group as a whole based on the study of the so-called “model” species. Expanding the range of studied species will allow us to understand more about the life of animals that surround us and, to some extent, model the environment in which we live. This statement is undoubtedly true for all living organisms, ”explained Elena Temereva .

“The work revealed previously unknown features of the organization, trunk, integuments, digestive, circulatory and reproductive systems of the organs of echiurids Lissomyema mellita. These discoveries suggest a special feeding method for individuals of the studied species, which, unlike many other species of echiurids, probably have the ability to finely sort small food particles on the lateral sides of the trunk. The use of small “delicate” detritus in food is also evidenced by the extremely short foregut in this species, which is responsible for the mechanical processing of food. Unusual giant glands at the posterior end of the body may secrete a secret that partially dissolves the calcareous substrate in which these animals live. The circulatory system in this species turned out to be unusually complex in comparison with other described species of echiurids. Perhaps this is a reflection of the ancestral plan of the structure of the circulatory system for echiurids, inherited from a hypothetical annelid-like ancestor, or a secondary complication that occurred for reasons unknown to us. These issues have yet to be resolved “, – addedPetr Kuznetsov , Master’s student, Faculty of Biology, Moscow State University.