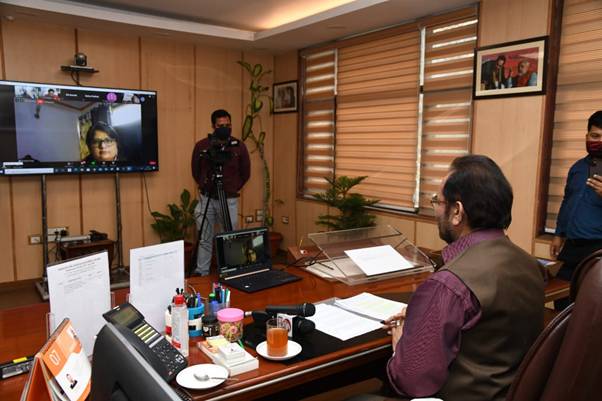 New Delhi: Union Minister of Minority Affairs Shri Mukhtar Abbas Naqvi today said here that “Reform is not only a Regulation”, “Reform is a Resolution” for betterment of the country and human being.

While addressing on “Role of Journalism, Media and Cinema in Nation and Generation Building” during inaugural session of Centre for Professional Development in Higher Education (CPDHE), University of Delhi, Shri Naqvi said that the government, politics, cinema and media are connected with each other with a sensitive thread of the society and courage, commitment and caution are tested, evaluated and essential mantra to strengthen these relations.

Shri Naqvi said that in the time of crisis, the government, society, cinema, and media act as “one soul, four bodies”. “The history is a witness to the fact that whenever there is a crisis in the country, before or after the Independence, all these four sections have together performed their respective responsibilities with complete honesty in national interest and human welfare”, he added.

Shri Naqvi said that the entire world is facing such a crisis in the form Corona pandemic after centuries. “Many generations have not seen such a challenge. Still, we have left no stone unturned to play the role of a mature society, government, cinema and media and especially in India, all these four sections became a part of solution to the problem”, he said.

Shri Naqvi said that there have been revolutionary changes in work culture, character and commitment of the establishment, society, cinema and media, considered to be the fourth pillar of the democracy, during the last six months. Reforms don’t take place due to only regulations, they take place due to resolution. Today, in the Corona pandemic, every section has been witnessing drastic change in the work culture and lifestyle.

Shri Naqvi said that print of newspapers remained closed for a long time, cinema moved from big screen to small screen and even online, several countries had become used to online news and information; but a large section of India’s population continued with its habit of reading newspaper before doing any work. Even during the Corona pandemic, online news failed to satisfy most of the Indians.

Pyxis One Raises $17M to Democratize Codeless AI in…

He said that same was the situation with the Cinema. The television is full of cinema, people get to watch a new film or web series every day, but most of them lack depth or strength in the story and creativity in the direction. Still today, the Indian society is crazy for good entertaining films, full of effective message to the society, that too on big screen. Films and media have not only become an indispensable part of our life, they also have strength to influence the society.

The Minister said that even during the Corona pandemic and lockdown period, the people did not say goodbye to films and media.

Although the electronic media and digital platforms were not affected that much, but most of the news channels and digital platforms focussed on creating hubbub and horror instead of news and information; to some extent they failed to fulfil their responsibility to give effective and constructive message to the society during the crisis.

Shri Naqvi said that history is the witness to the fact that Indian media and cinema has always played a crucial and constructive role during the challenges of a crisis. During the 1960s and 70s, the cinema full of nationalism and patriotic feelings still mesmerises the people; the patriotism of the media during that time remains an ideal for the present generation.

Shri Naqvi said that media has more important role to play in nation building in comparison to any Constitutional institution. Today, the print, electronic and digital media have a reach to about 80 per cent of the country’s population. Newspapers, television, radio, digital platforms have played a laudable role in spreading the information to remotest parts of the country from towns to villages. Digital media has also made a space for itself in our life.

Shri Naqvi said that the media not only creates awareness among the people through news and various information, it also makes the government system cautious through constructive criticism.

iednewsdesk Sep 17, 2021
While poor sleep was linked to higher levels of stress during the COVID-19 pandemic, more teens actually obtained…

TRIFED enters into an MoU with Foundation for Innovation and…