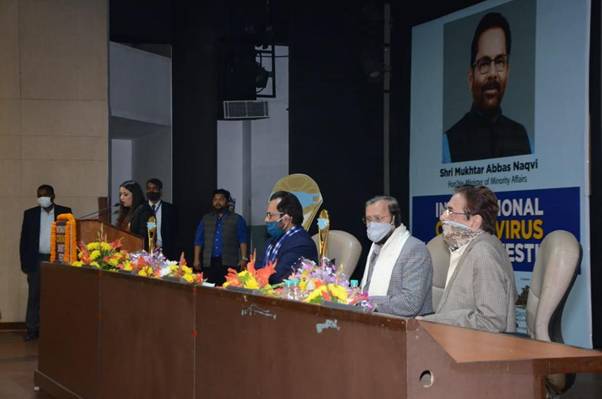 New Delhi: Union Minister of Minority Affairs Shri Mukhtar Abbas Naqvi has said that the government, society, cinema and media in India have played a commendable role with courage, commitment and caution during the Corona pandemic. Short films conveying awareness and strong message played an important role during the crisis.

Union Information and Broadcasting Minister Shri Prakash Javadekar, renowned film personalities, diplomats from various countries, journalists, intellectuals and other dignitaries were present on the occasion. More than 2800 films from 108 countries are participating in “International Corona Virus Short Film Festival”. These short films are based on cure, safety measure and lives during the Corona pandemic.

Shri Naqvi said that the history is a witness to the fact that whenever there is a crisis in the country, the government, society, cinema and mediaall have together performed their respective responsibilities with complete honesty in national interest and human welfare.

Shri Naqvi said that the entire world is facing such a crisis in the form of the Corona pandemic after centuries. Many generations have not seen such a challenge. Still, we have left no stone unturned to play the role of a mature society, government, cinema and media and especially in India, all these four sections became a part of solution to the problem.

Shri Naqvi said that there have been positive revolutionary changes in work culture, character and commitment of the administration, society, cinema and media during the last about 10 months. Reforms don’t take place due to only regulation, they take place due to resolution. Today, in the Corona pandemic, every section has been witnessing drastic change in the work culture and lifestyle.

Shri Naqvi said that the Indian society is crazy for good entertaining films, full of effective message to the society, that too on big screen. Films and media have not only become an indispensable part of our life, they also have strength to influence the society. This has been proved by short films during the Corona crisis.

Speaking at the International Coronavirus Short Film Festival,Union Minister of Information and Broadcasting Shri Prakash Javadekar said that the idea of organizing a film festival to celebrate short films made on coronavirus was wonderful. Shri Javadekar said that the festival witnessing participation of 2,800 films from 108 countries on a single topic is an example of peoples’ immense talent. The Minister congratulated the organizers of the festival.

This Science Festival is going to impact and benefit every segment of society: Dr. Shekhar Mande, DG, CSIR

RISE World Summit 2022 Announced: “Innovation and Diversity” to be this Year’s Theme