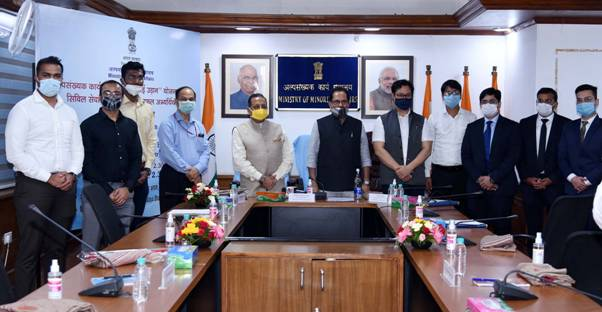 New Delhi: Union Minister of Minority Affairs Shri Mukhtar Abbas Naqvi today said here that the Government’s resolute and effective efforts for “promotion and progress” of meritorious youths from Minority communities have resulted in selection of 22 youths from poor, weaker, deprived sections of Minority communities in the prestigious Civil Services with the assistance of free coaching under “NaiUdaan” scheme, being run by the Ministry of Minority Affairs.

While felicitating youths belonging to Minority communities, who have been selected in Civil Services 2019 with the assistance of Minority Affairs Ministry’s free-coaching programmes, at Antyodaya Bhawan here today, Shri Naqvi said that that there is no dearth of talent in minority communities. But earlier, no such efforts had been made to create an environment which recognises potential among the Minority youths.

Shri Naqvi said that the youths, successful in the Central Government’s Civil Services, are a “role model” for youths from Minority communities and other weaker sections of the society.

Shri Naqvi said that more than 50 per cent of these beneficiaries of scholarship schemes are girls. Due to our concentrated efforts, school drop-out rate among the Minority students especially girls have decreased significantly and students from poor and needy families are receiving better education.

Shri Naqvi said that under the “Pradhanmantri Jan Vikas Karykram” (PMJVK), more than 34,000 infrastructure projects including school, college, hospital, community centre, common service centre, ITI, polytechnic, girls hostel, Sadbhavna Mandap, Hunar Hub etc have been developed in backward and deprived Minority concentrated areas across the country in the last 6 years. Only 22,000 such projects had been developed before 2014. While only 90 districts of the country had been identified for Minority communities’ development before 2014, the Government has expanded development programmes for Minorities in 308 districts of the country.

Admission24 Increases Manpower by 100% During the Lockdown