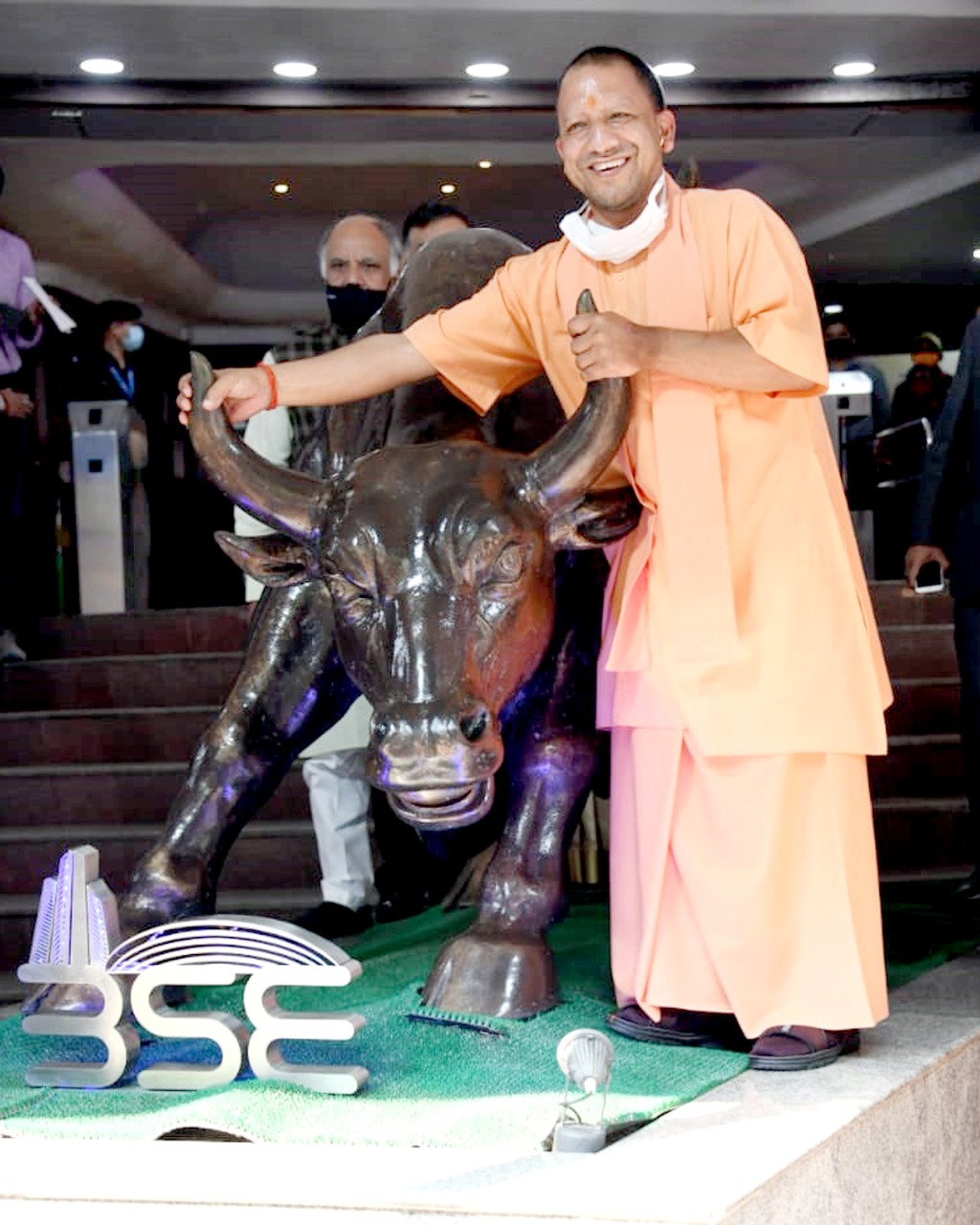 Mumbai’s Bollywood and industry marvels to invest in UP; Yogi charms Mumbai with UP’s investment proposition

Mumbai: Uttar Pradesh Chief Minister Yogi Adityanath attended the bell ceremony at the Bombay Stock Exchange (BSE) today for listing the 200-crore Lucknow Municipal Corporation (LMC) bond, a first of its kind event in the history of UP and the entire northern region. The CM interacted with the business and Bollywood communities in a bid to attract investment in Uttar Pradesh and rolled out a roadmap for the development of industries and film city in Uttar Pradesh.

Tata Son’s commitment to investing in end to end electronics manufacturing in the upcoming Electronics City planned near Jewar Airport, Mr. Sanjay Nayar, Partner & CEO, KKR India Advisors Private Ltd suggestion of bringing investment in Agri supply chain including cold storage, farm mechanization, warehousing and other such investment proposition have boosted the investor’s confidence in the state. The other dignitaries too are confident on investing in the state and have submitted plans and proposals to the UP government. Moving ahead, Uttar Pradesh will compete globally in terms of infrastructure. The state’s population is a resource and a market for investors. There is a lot of potential in the tourism, medical, one district one product and MSME sector.

Chief Minister Yogi Adityanath invited well-known industrialists of the country for investing in Uttar Pradesh and also informed them about the large-scale infrastructure development done in the state. The state government’s largest greenfield airport in Asia at Jewar (Noida), Purvanchal Link and the Bundelkhand Expressway which is under construction is touted to be a well-developed industrial corridor in the country. This advancement will create industrial clusters for one district one product.

The LMC bond has an AA rating by India Ratings and AA (CE) by Brickworks Rating. It was launched on November 13, and oversubscribed 4.5 times and closed at 8.5 per cent coupon rate for 10 years, which makes it the second lowest rate of all the municipal bonds launched till date. The funds raised through the bond will be invested in various infrastructure schemes in the state capital, including the water supply project and housing project being implemented under the Atal Mission for Rejuvenation and Urban Transformation (AMRUT) Scheme. The delegation led by the Hon’ble Chief Minister for the launch also comprised of many senior bureaucrats.

The defence corridor project also got a shot in the arm when the 12-member delegation led by Mr. S P Shukla, Chairman, FICCI Defence and Aerospace Committee and Group President (Defence, Aerospace, Agri and Steel) & Member of the Group Executive Board, Mahindra Group, met the Hon’ble CM. The dignitaries complimented the CM for fast tracking investments proposals in the state and expediting the Defence Corridor. The Defence Industrial Corridor is planned over 5000 hectares of land, of which 3796 hectares of land has been identified and total 1321.92 hectares of land has been acquired, including 1122 hectares in Jhansi & Chitrakoot alone. The corridor is being developed along the Bundelkhand Expressway. IIT- Kanpur is the Technology partner for shaping up the defence industrial corridor. Uttar Pradesh is poised well to maximize India’s potential in defence & aerospace manufacturing.