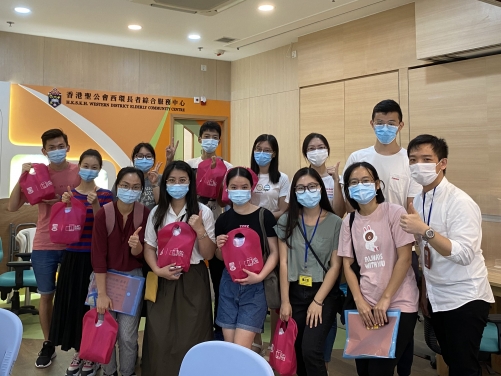 Music and Zoom with the Elderly at Moon Festival

The Moon Festival is approaching and the world is still grappling with the pandemic. Many in the community are dealing with isolation due to social distancing measures. To bring cheer and the festive spirit to the single elderly in the University’s neighbourhood, student volunteers from the University of Hong Kong, in collaboration with the Central and Western District Social Welfare Services, visited their elderly neighbours on the 19th and 26th of September. They presented three thoughtful gifts:

1. A hands-on tutorial on Zoom, for the elderly to video chat with friends while social distancing at home;
2. A online music concert for the elderly, a new way to celebrate in separate but together;
3. A care package with a low-sugar white lotus seed paste mooncake with egg yolk, mask packs, fruit and low-sugar drinks.

Great Learning to host a webinar on Interview Etiquette and…

This year’s HKU volunteers included both local and non-local students. In small groups, they visited the elderly and had engaging chats to understand about the needs of the elderly. Although for some students there was a language barrier, the elderly appreciated that some could speak to them in various Chinese dialects, and in turn some elderly made an effort to speak in English with the students. The students also presented an online music concert; one student performed “Fernleaf Hedge Bamboo under the Moonlight” on a Hulusi; and another student performed the widely known “The Moon Represents My Heart” on a piano, marimba and vibraphone.

A video of the visit has been uploaded to HKU 100 Facebook page: https://bit.ly/3435MrL

Eileen Chang at the University of Hong Kong: An online presentation of images and documents from the archives