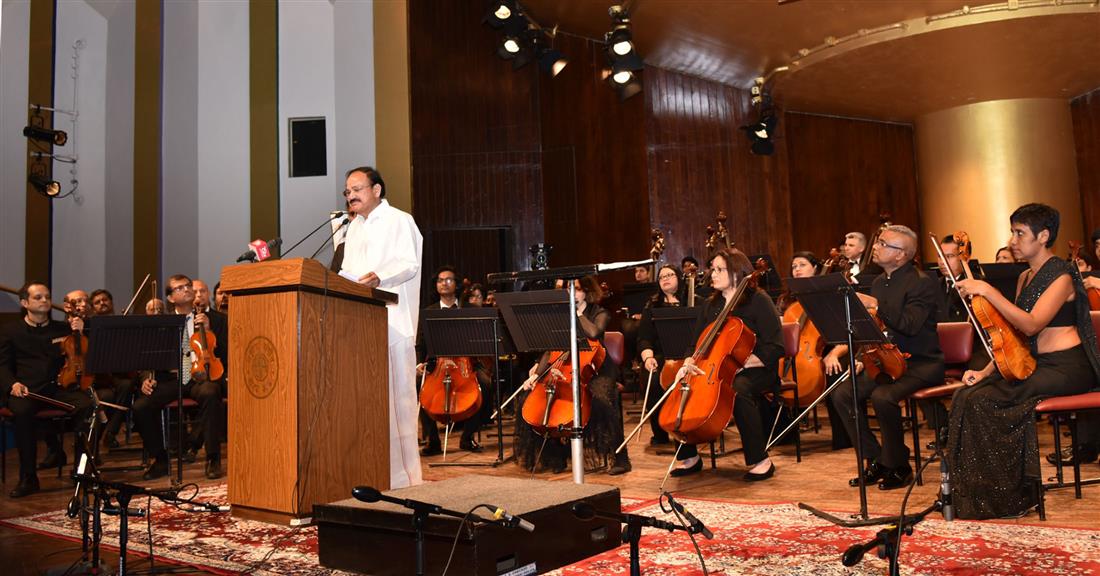 Music has the power to overcome the tribulations of war and terrorism: Vice President

New Delhi: The Vice President of India, Shri M. Venkaiah Naidu has said that music has the power to overcome the tribulations of war and terrorism and sends the message of oneness.

Speaking at the “CHIRAGH” concert of the South Asian Symphony Orchestra at the National Centre for the Performing Arts (NCPA), in Mumbai today, Shri Naidu said that music speaks a universal language and transcends geographical boundaries and unites people.

Shri Naidu appreciated Dr. Ahmad Sarmast for training the young children from Afghanistan who performed at the concert overcoming such barriers. He said that the young performers have proved that their music symbolizes the best of the human spirit and speaks the universal language of peace and harmony.

The Vice President called upon organisations such as the South Asian Symphony Orchestra to carry the message of peace and non-violence and dispel the dark clouds of misguided minds that were unleashing sporadic spurts of mindless violence.

Shri Naidu said that events such as the Concert organised by CHIARGH showcase India and its people’s commitment towards cooperation and co-existence among all nations.

The Vice President wanted the members of the orchestra and musicians at large to become ambassadors for a new and resurgent South Asia. He asked them to re-capture the essence of ancient civilizational ethos such as – peace, compassion and co-existence and re-connect with the common cultural well springs that unite the region.

The South Asian Symphony Foundation established by Smt. Nirupama and Shri Sudhakar Rao, retired senior civil servants, has built a unique project – a Symphony Orchestra to unite the people of South Asia region, through the divine medium of music.

Saying that Music was a powerful art form that could transform the quality of our lives, Shri Naidu asked the South Asian Symphony Foundation to build a repertoire of indigenous music from the region and continue to spread the universal message of peace and brotherhood around the world.

The Vice President and the gathering paid tributes by observing silence in the memory of those who lost their lives on the dastardly terror attack in Colombo, Sri Lanka recently.

The Governor of Maharashtra, Shri C. Vidyasagar Rao, more than 70 musicians from countries like Afghanistan, Sri Lanka, Nepal, India and others, Orchestra Conductor Shri Viswa Subbaraman, founders of CHIRAGH, Smt Nirupama and Shri Sudhakar Rao and eminent musicians and art lovers from Mumbai were present on the occasion.

“We are gathered here to witness an important occasion- one in which we show, that we, in India, as a country and people, are dedicated to cooperation and co-existence among all nations. The South Asian Symphony Foundation established by Smt. Nirupama and Shri Sudhakar Rao, retired senior civil servants, has built a unique project – a Symphony Orchestra that unites the people of our region of South Asia, through the divine medium of music.

Music speaks a universal language. It transcends geographical boundaries and unites people. We, in India, have always maintained that musical gatherings are an effective form of yoga or spiritual discipline. That is exactly what an orchestra consisting of many musicians sets out to do. Each and every member of the orchestra has to concentrate deeply on his or her own instrument but at the same time synchronize it with other musicians. It is a supreme example of preserving your own identity and yet being a part of a larger, collaborative endeavour. In relations between nations and human beings, it is probably the ability to live and work together that can make all the difference.

The great composer, Robert Schumann said once that to send light into the darkness of men’s hearts – such is the duty of the artist.

Music is a powerful art form that can transform the quality of our lives. I believe that the South Asian Symphony Orchestra through its concert, Chiragh, will light the way forward so that cultural collaboration and dialogue, existing for long among South Asians, is further strengthened.

South Asia needs to be more integrated, economically and culturally, and our people-to-people ties and understanding must grow if we are to overcome the legacies of the past that have kept us apart, divided and distant from each other.

I am glad that the South Asian Symphony Orchestra includes musicians from many South Asian nations and the South Asian diaspora. The Orchestra is a beautiful community of sisters and brothers of different nationalities, dedicated to creative expression through music. It speaks the language of peace, it unites minds and transports us to a sublime experience.

We must not stop with this one concert alone. The South Asian Symphony Foundation must now think of building a repertoire of indigenous music from the region that can be played around the world. We are heirs to five thousand years of civilization in our region from ancient Gandhara and the Hindu Kush mountains to the river waters of the Indus and the Ganga, from the mighty Himalayas to the Bay of Bengal, and the Arabian Sea and onwards to the southern shores of Sri Lanka and the Maldives and the Indian Ocean. Let us celebrate this wealth of cultural traditions and musical cadences.

At the same time, you should plan concerts in other cities of the region and beyond. I hope as time goes by, you will become one of the great orchestras of the world and be recognized and lauded for the message of peace and coexistence that you embody.

Music training for the young children of the region is also important. This orchestra has some children from Kabul in Afghanistan who are profiles in courage. All of them are dedicated to their music and communicating through their art with the outside world, bringing fame and respect for their ancient country, overcoming the tribulations of war and terrorism and symbolizing the best of the human spirit. I salute them and their dynamic and most courageous teacher and leader, Dr. Ahmad Sarmast who is with us today.

This is the spirit that we must constantly encourage and foster and that is why the South Asian Symphony Orchestra must carry this message of peace and non-violence and dispel the dark clouds of misguided minds who are unleashing sporadic spurts of mindless violence.

The orchestra’s members can all be ambassadors for a new and resurgent South Asia. After all, South Asia has been a cradle of a great civilization founded on the principles of peace, compassion and co-existence. We must re-capture that essence of our ancient civilizational ethos. We must re-connect with the common cultural well springs that unite us.

I wish all the musicians of the Orchestra, the conductor Viswa Subbaraman, and the founders, Nirupama and Sudhakar Rao all the very best in their endeavours to promote peace and humanitarian dialogue and cooperation in the region of South Asia to which we all belong.

UP Board results 2019; Class 12 results down by 2.37%, intermediate examination is lowest in the past 10 years