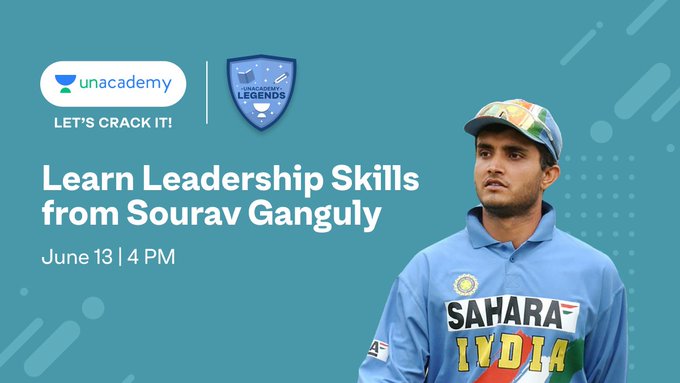 The session lasted for 60 minutes and covered various facets of Ganguly’s leadership journey from the time he was made captain of the Indian Cricket Team and to the time when he took over the reins of the BCCI. ‘Dada’ elaborated on the real life experiences from his leadership journey talking about various factors that can help an individual become a good leader as well as a team player. Sharing his thoughts and experiences, Sourav Ganguly mentioned to the learners that one should always do what they feel is right without having the fear of being judged or criticized.

Taking over as a captain at a young age, he also spoke about how leadership skills are honed over a period of time and not necessarily learnt from a book. In order to be a great leader, one must give sufficient freedom and liberty to the team members along with opportunities and responsibilities, followed by the required recognition and appreciation. For instance, during the Live Class, Ganguly recalled how he stood his ground during the selection meeting ahead of the 2003 Australia tour to include Anil Kumble in the team. Kumble went on to play a pivotal role in India’s success during the tour. Pointing this out, he stressed on the fact that supporting players during the crucial stages of their career is essential.

His thought provoking words on leadership skills will inspire various learners who aspire to become leaders of the nation or in the field of their choice in future.

RBL Bank Flags off 8th edition of ‘UMEED 1000’ Cyclothon in…

s.Oliver Group enters into a strategic partnership with…

During the session, Sourav Ganguly addressed various questions from the audience including – How to become a good leader? How to manage multiple team members and decide when to speak and when to let go off? How do you envision the future of Indian cricket? and many more.

Key tips that Ganguly shared during the Live Class:

Leadership is learnt from experiences and not from books
In order to create our own benchmarks we must do what we feel is right without fearing judgements or criticism
A leader must be a good team player, and give utmost importance to the team members
In a leadership role, the most critical factor is to identify the talent and later allow the talent to flourish
The team members must be given independence as well as responsibilities to act as leaders in their own capacity
There is fear of failure in everyone’s life but one must let go of it and express freely
Communication is very important for a leader to derive best results of the team members – a leader should be honest with his team at all times
As a leader, one must acknowledge every individual’s contribution followed by the deserved appreciation and recognition
One has to find their own ways to handle pressure – a life without challenges does not exist
As a leader, one has to earn the trust of the team and walk together towards being successful
Be open to criticism to be a better person
People will remember the legacy you leave behind as a leader. However, legacy will never be judged on wins and losses
Your life is your attitude. The way you lead your life defines your success. If you keep faith in yourself, it’s never over until it’s over
Leadership is all about beliefs, failures and handling pressure
Earlier in March, Unacademy announced the commencement of the ‘Legends on Unacademy’ program with the idea of bringing legends from different walks of life to teach life lessons through Live Classes. In March, these Live Classes were conducted by legendary cricketers such as Brian Lara, Brett Lee and Jonty Rhodes, through the association with the Unacademy Road Safety World Series. In April, renowned personalities like Shashi Tharoor, Kiran Bedi, Virat Kohli, and Anushka Sharma took Live Classes to inspire learners on the platform. Additionally, the recently concluded sessions include the ones with Sunil Gavaskar, Sourav Ganguly, Zev Siegl and Mary Kom.

Unacademy is an education technology platform founded by Gaurav Munjal, Roman Saini, and Hemesh Singh in 2015. It was started as a YouTube channel by Gaurav Munjal in 2010. Headquartered in Bengaluru, Unacademy is India’s largest learning platform that brings expert Educators together with millions of students in need of quality education. With a growing number of more than 10,000 registered Educators and 13 million Learners, Unacademy is changing the way India learns. The Unacademy group consists of Unacademy Subscription, Wifistudy, Chamomile Tea with Toppers, and Let’s Crack it Brands. The company is backed by prominent investors such as General Atlantic, Facebook, Sequoia India, SAIF Partners, Nexus Venture Partners, Steadview Capital, and Blume Ventures.

s.Oliver Group enters into a strategic partnership with Techno Design GmbH for an…

University of Bremen: Number of people in need of care higher than…