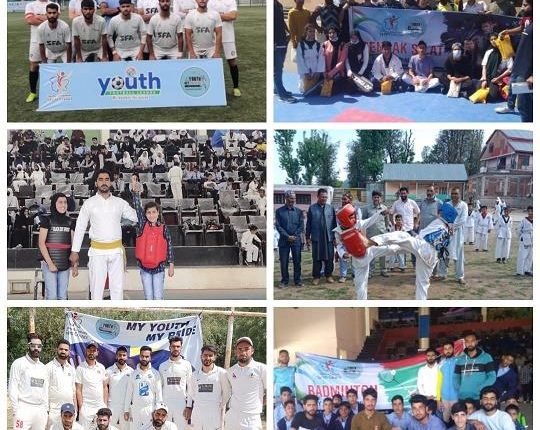 My Youth My Pride” events expand base; More areas included in the 1st-Phase of the sports initiative

Javid Ahmad Shan Sarpanch of Gool graced the occasion to encourage the participants.

The chief guest encouraged the local youth to take up sports. He said that apart from being a good career option in wake of many sports schemes doled out by the government during the past few years, this is also a great stress buster and helps rejuvenate and refresh after attending tireless daily chores.

He also stressed the need for sports activities in remote areas like Gool which is bereft of any other means of entertainment. He said, “Sports can pave way for a better society and nation by rekindling the spirit of companionship and brotherhood.

He also lauded the efforts of the Sports Council for this unique sports initiative and bringing a remote area like Gool under its fold and hope that at least one or two sports academies are also set up in the district Ramban.

Guest of honor Roshan Din, Sarpanch also appreciated the gesture and assured his support for the promotion of sports and games in the area. Mohammad Rafi, Principal GHHS Gool attended the function as a special guest.

Satwinder Sathi who briefed the audience about the “My Youth My Pride” sports initiative of J&K sports Council.

The matches were officiated by Satwinder Sathi, who also declared the results in the end. A large number of sports lovers flocked to the venue to root for the players of their respective panchayats.

Meanwhile, in the Kashmir division events in the disciplines of Badminton, Thang-Ta, Pencak Silat, Taekwondo, Cricket, and Football were conducted in Nilandrusu Bijbehara, Nanil, and Srinagar.

The indoor hall of Nilandrusu witnessed a mammoth gathering of sports lovers, students, and local youth who enjoyed the Badminton, Thang-Ta, Pencak Silat and Taekwondo the events to the hilt. More than 400 participants took an active part in the event which included both Boys and Girls.

While addressing the participants and others present on the occasion, the chief guest said, “sports teaches ethics and values and these two play a pivotal role in one’s life to safeguard one from ill effects of drug abuse and other social evils besides ensuring not to deviate from the standard of living a virtuous life and maintain the integrity of character”.

He also applauded the role of the Sports Council in grooming players on professional lines under the tutelage of best-skill masters in the business.

Meanwhile, the first game of the final round between Baramulla FA and J&K Bank Academy ended in a draw at TRC Synthetic Turf Football Stadium, Srinagar.

The match between two of the four teams that qualified for the final round in a race for the coveted trophy went down to the wire with both teams making one successful attempt at the opponents’ goal and ending the match at a 1-1 draw.

JK Bank Academy drew the first blood and maintained the lead till the end of the first half. The second half turned out to be even more fierce with both teams not ready to give up. It was in the 59th minute of the second half that Shahid Nazir of Baramulla stuck the net, a shot that eventually ended the torrid evening of his team. Both the teams earned 1 point from the match. Shahid Nazir was adjudged “Player of the Match” for helping his splendid performance against the star-studded J&K Bank Academy.

The second match of the final round between SCFA Srinagar and SCFA Bandipora was still in progress when reports last came in.

Spring Shield T-20 Cricket Tournament being played in Nanil is in the final stages. The match between Super Star Mattan and Matipora Sports played yesterday evening was won by the team from Mattan. Super Star Mattan set a target of 167 runs, which their opponents failed to chase and lost the match by 31 Runs. Fayaz Shah for his brilliant all-round performances of 40 runs and 2 wickets was awarded man of the match.

Ist match of the fixture slated for today was played between JCC Nanil and Seer XI. JCC Nanil after winning the toss scored 135 for the loss of 7 wickets in their allotted 20 overs. Shakir top-scored for the team with 46 runs while Mudasir was the pick of the bowlers for his team gabbing 3 scalps. In reply Seer XI scaled the target and won the match by 2 wickets.

Man of the match was awarded went to Mudasir Rasool for his all-around performances both with the bat and ball, scoring 27 important runs and claiming 3 wickets.

The second match of today’s fixture between Pahalgam Blues and Super Star Mattan was in progress when the report was being filed.

All the events are part of the “My Youth My Pride” sports initiative to reach out to athletes at their doorsteps, tap the talent and groom them in academies.

iednewsdesk May 18, 2022
Trauma experts from Queen’s University are working with clinicians in Ukraine and Poland who are supporting…

University of Manchester: Treatment for commonest form of blindness…

University of Houston: Trauma of Migrant Separation Lingers Long After…