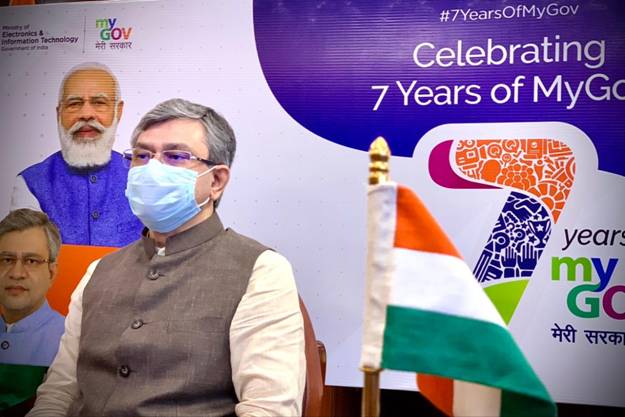 New Delhi: MyGov, the citizen engagement platform, launched by Prime Minister Shri Narendra Modi on 26th July 2014, with the idea of bringing the Government closer to the common man using online platform, creating an interface for healthy exchange of ideas and views involving the common citizen and experts with the goal to contribute to the social and economic transformation of India, completed 7 years long journey today. To commemorate the contribution of MyGov in promoting participatory governance, an event was organised with the theme of MyGov Positive – promoting positive use of Social media.

Since the day of launch, MyGov has evolved into a robust citizen engagement platform that is being leveraged by almost all the Government departments for enabling participatory governance. Today, it has more than 185 lakh registered users on MyGov platform – MyGovSaathis, who actively engage with MyGov and give their ideas and suggestions on various policy issues and also take part in Pledges, Quizzes and contests. Citizen consultations are and essential component of policy making that ensures that views of all stakeholders are incorporated in Government decision making process.

MyGov along with its portal aims to connect with almost every citizen through its social media platforms and today, is among the top government platforms available on social media. MyGov’s endeavour has also been to bridge the gap concerning dissemination of information among digital and non-digital societies through innovation, and encouraging adoption of technology by citizens to stay informed. MyGov has also been able to create a model of promoting positive use of social media and identifying change makers and unsung heroes from across the country who are silently contributing to the society.

Dissemination of timely and authentic information has been the forte of MyGov. With its effective campaign of COVID19 communications and vaccinations, MyGov has emerged to be a trusted source of information for citizens during these difficult times. MyGov team has worked round-the-clock to ensure that the correct information reaches citizens, in a timely manner.

At a time when the nation was surrounded by fake news around COVID-19, MyGov Corona Helpdesk – the Chatbot on WhatsApp became the source of authentic news to counter misinformation and myths.

It must be mentioned that the AarogyaSetu App has played an integral role in containing the spread of COVID-19. To further make this the most downloaded contact-tracing app dynamic, MyGov has been persistently managing its content & Social Media Outreach.

MyGov also has used its platform to engage with citizens innovatively and source solutions for the challenges we faced as a Nation. The clarion call of PM for AatmaNirbhar was well displayed by MyGov through the launch of challenges, innovations and hackathons for start-ups and individuals across the length and breadth of the country.

Acknowledging the huge potential of Free and Open Source Software (FOSS) in India, FOSS4GOV Innovation Challenge was announced during the event.The #FOSS4GOVInnovation Challenge calls upon FOSS innovators, technology entrepreneurs and Indian Startups to submit implementable open source product innovations in the fields of Health, Education, Urban Governance, Agriculture or any other field related to E-governance for public for two categories:

Registration Link for the FOSS4Gov Innovation Challenge are available on MyGov and MSH platform.

The FOSS4GOV Innovation Challenge is proposed to be conducted in five phases including:

3. Proof of Concept (POC) phase (10th September 2021 – 21st  October 2021) Teams may undergo mentorship supported by Omidyar Network (optional) for 2 weeks to develop and submit their final Proof of Concept (PoC). The shortlisted teams (5 in each category) shall be invited to pitch their presentations.

5. Productisation phase (3rd   November 2021 onwards) Handholding and mentoring the winners to scale their products, Listing of these solutions on the GeM platform for easy procurement by other govt. agencies.

King’s College London: Armed Forces Personnel who are injured in…

McGill University: Melanoma map shows skin cancer is on the rise in…

University of Pretoria: Transdisciplinary research will be key in…