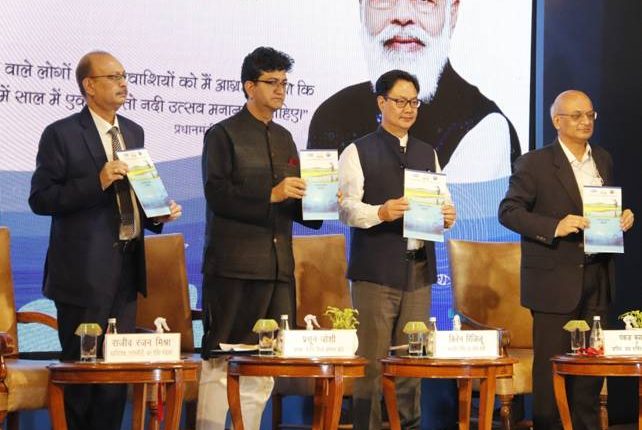 New Delhi: The final day of 3 days long Ganga Utsav 2021 – The River Festival began with glimpses of last two days followed by Kathak dance performance by famous dancer Smt. Shovana Narayan. She performed the story of pains and sufferings of mother Ganga and appeal to all to help in keeping it healthy through her dance. This Indian classical dance form powerfully communicated the message of preservation of nature.

Welcoming Shri. Kiren Rijiju, Hon’ble Minister for Law & Justice and Shri Ganjendra Singh Shekhawat, Jal Shakti Minister and other delgates, Shri Rajiv Ranjan Mishra, Director General, NMCG informed that well-known singers, musicians, artists, story-tellers, scholars and literary figures performed and participated in Ganga Utsav 2021. He also informed that there were some very important launches like CLAP, 1st Chacha Chaudhary comics on Ganga rejuvenation, a song on Rivers of India by IIT Madras and much more. He informed that this year Ganga Utsav is being celebrated across India, celebrations are happening from Surat to Nagaland and from Leh to Kanyakumari. “Ganga Utsav has shaped into nation-wide Nadi Utsav and this is just the beginning” he said.

Congratulating NMCG for their contribution to Azadi ka Amrit Mahotsav in his keynote address Shri. Kiren Rijiju, Hon’ble Minister for Law & Justice said, “I have travelled to almost origin of every river in the country. Ganga especially looked very polluted few years back but today, it looks cleaner and magnanimous. The work is inspiring and I pledge my full support to the mission and would always be happy to join and contribute.” He attributed to this success to Hon’ble Prime Minister’s vision, NMCG’s holistic approach and volunteer’s hard work.

Shri Gajendra Singh Shekhawat, Jal Shakti Minister recalling Hon’ble Prime Minister’s call for celebrating Nadi Utsav said, “India has a tradition of reverence for rivers but with rise of consumerism this connect was lost somewhere” in his valedictory Address at Ganga Utsav 2021. “Nadi Utsav will sow the seed for reviving this tradition of respecting rivers. This will encourage people to conserve and protect our rivers.” he added. He complimented Namami Gange for “laying the foundation of Nadi Utsav through successful conduct of Ganga Utsavs over last few years and the Ganga Utsav this year has laid foundation for strong Nadi Utsav in country”.

Internationally acclaimed poet, lyrists and communication specialist Shri Prasoon Joshi, who is also the maker of Kartvya Ganga song said, “The idea behind Kartvya Ganga song is if we focus of our responsibilities our rights will be fulfilled on its own.” He also recited his poem on importance of rivers which he wrote for Ganga Utsav.

An expedition, Ganga Mashal was flagged off by Hon’ble ministers on 3rd day of Ganga Utsav. Ganga Mashal is part of Meri Ganga Meri Shan campaign by Ganga Task Force- a battalion of Territorial Army raised under Namami Gange mission for various rejuvenation efforts. The Mashal would travel along the Ganga and halt at 23 locations where events to sensitize people and volunteers will be organised. Shri Kiren Rijiju said, “Ganga Mashal is the best way to take Ganga Utsav forward in a dignified and inspiring manner.” Brigadier Naveen Singh was representing Ganga Task Force at the flag off ceremony joined by Col Vaidya.

Ms. Sakshi Jha and Shri. Sarfaraz Ali were felicitated by the ministers for their artwork, ‘Kachre se Kanchan’. Young painters doing live painting during the Utsav were also felicitated .

Shri. Rozy Aggrawal, Executive Director (Finance), NMCG said that the journey which began with a small event in 2017 has come a long way in form of Ganga Utsav. He thanked the teams working at districts levels who ensured that this Nadi Utsav is a huge success. More than 77 events were organised by NMCG volunteers. He also informed that more than 8 lakh people virtually joined the festival during these 3 days.

6th International One Health Day: Stakeholder Forum on ‘Industry and One Health’ organised by Department of Animal Husbandry and Dairying