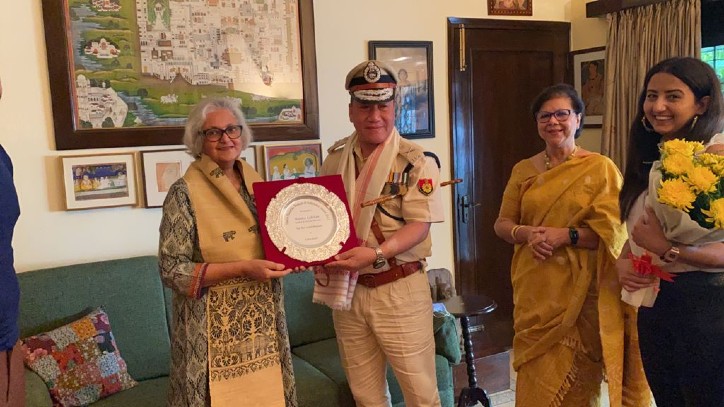 New Delhi: Veteran Writer and Festival Director, NAMITA GOKHALE was awarded the Seventh Yamin Hazarika Woman of Substance Award 2021 on the evening of 5th September 2021 in a virtual ceremony. Robin Hibu, IPS, Special Commissioner, Delhi Police was the Chief Guest on the occasion. Historian Prof Yasmin Saikia of the Arizona State University, USA was the Guest of Honour.

Yamin Hazarika was the first woman from Northeast India to be selected for the NCT of Delhi, Andaman and Nicobar Island, Lakshawadeep, Daman and Diu and Dadra and Nagar Haveli Police service (DANIPS), a federal police service in India, administering Delhi and the Union Territories in 1977. Hazarika succumbed to cancer in the year 1999, but the great trail of her legacy lives on even today, inspiring millions, especially women in the law enforcement sector.

Yasmin Saikia said “History is no longer confined to great men, but History is also about great women. I am thinking of women like Yamin Hazarika and Namita Gokhale who are somewhat like us, we can access them as friends, colleagues, family members, and so on, and yet they are the ones who create their reputations made in a spirit of tireless work and quiet fortitude transcending the social forces and society in general that come in their way, and keep moving forward with determination and raise themselves so outstandingly above the rest of us. “

Namita Gokhale remarked “The world is full of unsung heroes whose legacy adds momentum to human progress. Yamin Hazarika was made of heroic mettle and continues to be an inspirational figure more than two decades after she passed on.”

Robin Hibu, IPS, Special Commissioner Delhi Police, who hails from Arunachal Pradesh, observed that Yamin Hazarika, who had been his senior colleague, was an exceptional figure. He also stressed the connectivities of the North East States with the rest of India through culture, myth, and the narratives of the Mahabharata.

Namita Gokhale is a critically acclaimed award-winning writer and respected festival director. She has written twenty books, including eleven works of fiction. Her recent novel, Jaipur Journals, is set around the vibrant Jaipur Literature Festival. Betrayed By Hope, a play on the tragic life of the poet Michael Madhusudan Dutt, was published last year. A new novel, The Blind Matriarch, will be out later in September 2021.

A co-founder and co-director of the Jaipur Literature Festival, Gokhale also mentors Himalayan Echoes, the Kumaon Festival of Literature and the Arts. She has been conferred various prizes, including the prestigious First Centenary National Award for Literature by the Asam Sahitya Sabha in 2017.

This annual event in memory of late Yamin Hazarika is organised by a collective of women professionals from the year 2015, 25 years after her death. This is a unique sisterhood of women from different fields — medicine, engineering, academics, law, media, management. Teresa Rehman, journalist and author says, “We are a loose network of working women. It seems like a miracle that we have completed seven years of a journey that was floated as an idea on a WhatsApp chat. I am glad Yamin Hazarika could bring all of us together.”

iednewsdesk Jun 22, 2022
In a review, published today in the journal Frontiers in Earth Science, scientists reveal that predators became…

University of Bristol: Inability to stand on one leg in mid to later…

University of Bremen: Algae mats as a haven for many animals in the…