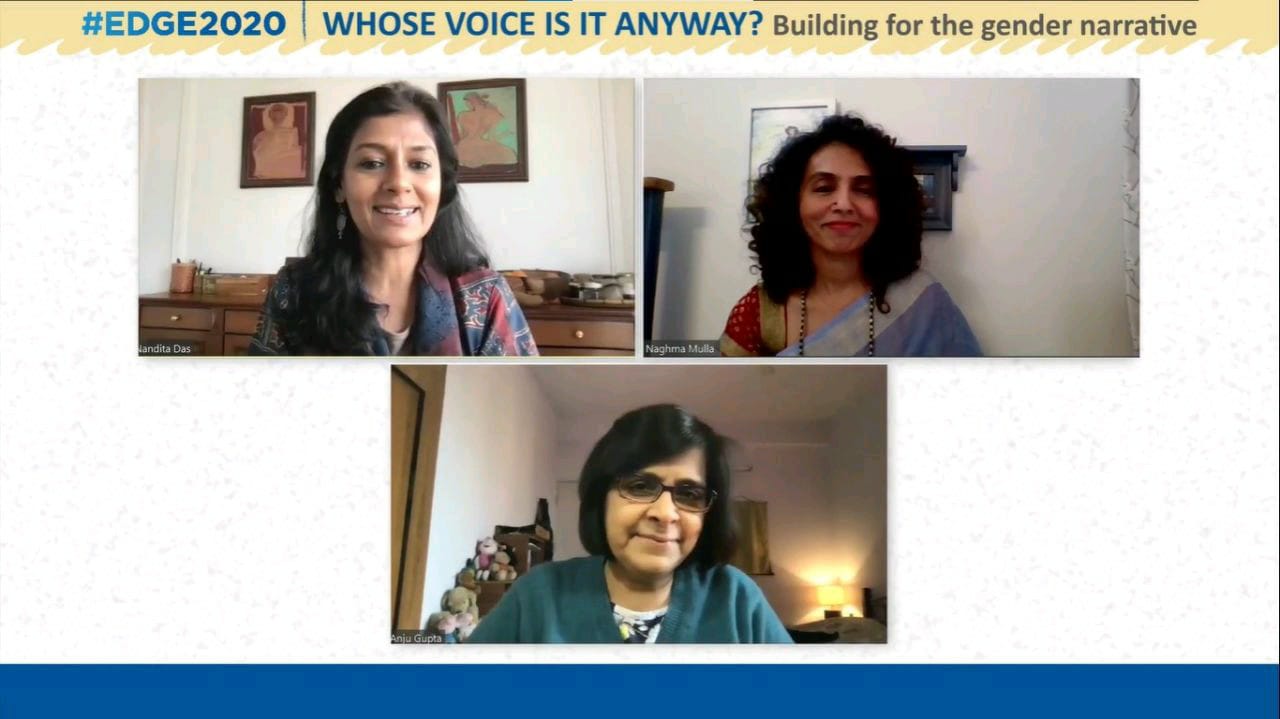 Mumbai: Committed to addressing the socio-economic inequalities that prevent women and girls from achieving their full potential, EdelGive Foundation, the philanthropic arm of Edelweiss Group, concluded its annual flagship conference EDGE 2020, last evening. EDGE is a collaborative platform initiated by the Foundation to connect the funding fraternity with non-profit organisations doing remarkable work and facilitate conversations on collective impact.

The evening theme titled – ‘Whose Voice is it Anyway – building for the gender narrative’ was dedicated to the issues that have plagued women during the last year-Issues around violence, justice, financial stability and leadership. Here are some key highlights from Day 3:

Uma Chatterjee, Co-Founder & Executive Director, Sanjog drove a powerful discussion with Supia Khatun, a leader from the Utthan women survivors collective and a member of Indian Leadership Forum Against Trafficking (ILFAT). Supia worked very closely with the survivors of domestic abuse who suffered from Post-Traumatic Stress Disorder (PTSD), as the lockdown simulated some of the earlier experiences. Being a victim and survivor herself, Supiya today provides much needed leadership, counselling and therapy to these women.

“Our responsibilities as individuals is that no matter where we are seated, we must first become aware of the system and ensure more discussions & dialogues take place on pressing issues. We can then possibly reach a solution without slotting or confining someone as a victim or survivor or putting the onus back onto her.”- Naghma Mulla, President & COO, EdelGive Foundation

Grassroot Leaders, Kamlesh, Chairperson, Savera Mahila Manch and Khatija, Chairperson, Kranti Mahila Manch spoke with Aiswarya A, Chief Manager Partnerships, EdelGive Foundation. Both leaders rallied support from women’s self-help groups in their own communities and bravely fed low-income communities during the lockdown, via their Grain Bank initiative. Khatija painfully recounted the kind of mistrust she faced in the beginning when people suspected the organisation would keep the grains for their own benefit. Kamlesh too faced similar allegations but the thought of letting the vulnerable suffer kept her awake at night. Women empowerment focused NGO, Ibtada, helped both women by directing the management of resources and creating kits that carried other emergency aid.

In the next segment, Actor, Director & Social Advocate, Nandita Das and Anju Gupta, ADG, Uttar Pradesh Police joined Naghma Mulla, President & COO, EdelGive Foundation to examine the gender narrative in light of the pandemic. Using her short film, ‘Listen to Her’, as an example, Nandita spoke extensively about the kind of conversations that need to come to the forefront to make women empowerment a part of everyday discussion. She also highlighted the need for men to be included in these discussions and become a part of the solution. Anju shed light on how the law and its processes needed to be viewed. The system is robust and offers solutions like the domestic abuse helplines, which are one such way to access the support system, both during the pandemic and otherwise.

“Of course, we must speak up. But it’s easier said than done for women who are conditioned to keep quiet. There is such a culture of silence that until we don’t begin to listen; women are not going to speak up. People who have the power to influence have to ask themselves how to get engaged and involved because there’s no dearth of issues, no dearth of messaging that is required.”

“It has been pointed out in the past that equal is not just better, equal is excellent! Until we have an equal number of women and trans people in rooms where decisions are being taken – whether those are boardrooms, parliaments, state assemblies or banks – we have to have more women in rooms where decisions are being made. They create systems that are more equitable and more sensitive.”

“One of the blocks is financial literacy. Not only was it a mind block for me but it is one for many women entrepreneurs. Somehow, finances frighten us. But I made a decision to not let numbers faze me. All of us have dreams but social conditioning has taught us that it is unfeminine to be ambitious.”

The evening reached its finale with a candid conversation between two of India’s most prominent women philanthropists, Rohini Nilekani, Founder-Chairperson, Arghyam and Vidya Shah, Chairperson and CEO, EdelGive Foundation. The central focus of this conversation was the role that civil society, and women in particular, can play by collaborating with the government and with other agencies to bring about impact.

“From our experience with the EdelGive Hurun Philanthropy List, we find that there is a great reluctance or shyness about any conversation on what the wealthy are doing for public good. It’s pertinent for philanthropy to be bigger, bolder and more edgy moving forward, because it is only with discussions, sharing of experiences and thus collaborations, that we can increase our impact.” – Vidya Shah, Chairperson and CEO, EdelGive Foundation

“The task before civil society, the media and all of us who care about such issues is to make people see that the whole idea of “business of business is business” is over. We understand the inter-connections so much better, especially in 2020, that I think it is time for more businesses and wealthy people to start giving forward into areas where they directly don’t benefit from. It is also up to us to tell these stories a little better than we are doing right now to draw in more people into this adventure.”