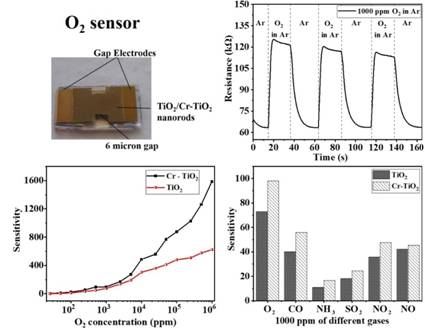 Nanorod based oxygen sensor working at room temperature can save lives in places like underground mines, higher altitudes

New Delhi: Indian Scientists have developed a nanorods-based oxygen sensor which works at room temperature with assistance of UV irradiation and can detect oxygen gas concentrations in places such as underground mines, at higher altitudes, inside aeroplanes and research labs.

Monitoring O2 concentration in very low ppm-level is of paramount importance, and a fast and selective oxygen sensor working at room temperature can save lives in places like underground mines, higher altitudes and improve the accuracy of numerous experiments being conducted in research labs.

A team of scientists led by Dr S. Angappane, a Scientist at the Centre for Nano and Soft Matter Sciences (CeNS), an autonomous research institute under the Department of Science & Technology, Government of India, have fabricated a metal oxide semiconductor (MOS) nanorods array-based oxygen sensor which works at room temperature with assistance of UV irradiation and can detect broad ppm range of oxygen gas concentrations. They used titanium oxide for the purpose and work, involving Hiran Jyothilal, Gaurav Shukla, Sunil Walia, and Bharath SP led by Dr S. Angappane, published in the journal Materials Research Bulletin.

The team showed that the sensor gives the best sensitivity with low power consumption and works at room temperature. The fabricated sensors exhibited response and recovery times of around 3 sec and 10 sec, respectively, at 1000 ppm. The sensor works in oxygen concentrations ranging from 25 ppm to 10 lakh ppm (100%) with good stability. The superior sensing property is attributed to the enhanced electrical conductivity, excitons (combination of an electron and a positive hole) created, and desorption of water molecules (released through surface) from the sensor surface by UV irradiation, facilitating increased interaction of oxygen molecules with chromium incorporated in titanium dioxide slanted nanorods array present in the sensor.

The CeNS team is further working on miniaturising the sensor and its electronics interfacing with other gas sensors to fabricate a suitable electronic nose.