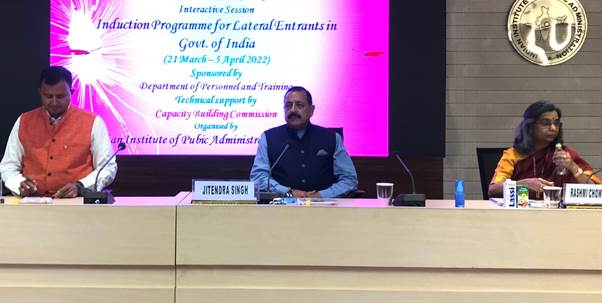 Interacting with the 30 lateral entrants into the Government of India at the level of Joint Secretary / Director and Deputy Secretary during their 15-day induction program at the Indian Institute of Public Administration, New Delhi, the Minister said that the ultimate goal of the lateral entry mechanism is to select best of the best from a wider pool of choice as various flagship schemes started by Prime Minister Shri Narendra Modi require new skill set and expertise. He noted that this is happening at a crucial time when Prime Minister Modi is leading India to be a frontline nation in the world.

Dr. Jitendra Singh, who is also the Chairman of IIPA Executive Council, suggested to the inductees that accountability, transparency and citizen-centric approach should be the hallmark of their stint with the Government of India.

The Union Minister opined that the gap between the corporate and the government sector is narrowing rapidly and that enhanced skills are needed in new work approach system of today.

Dr. Jitendra Singh said that since India’s stature in the world is on a rise, the entrants can make best use of this great opportunity to contribute to the nation building. He said that the efforts of today can make India a world leader in next 25 years, when the country celebrates 100 years of its independence.