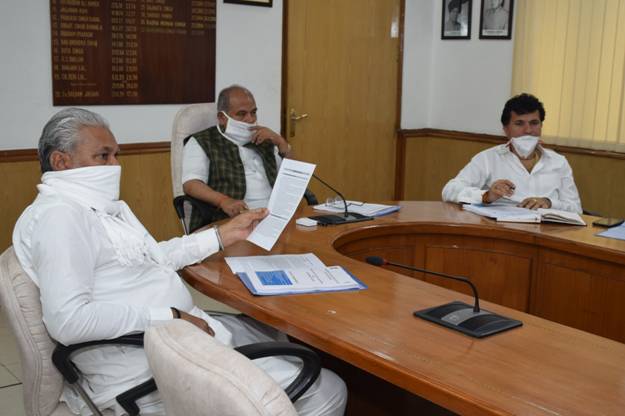 New Delhi: The Union Minister for Agriculture & Farmers’ Welfare, Shri Narendra Singh Tomar took a review meeting of the Department of Agricultural Research & Education (DARE) and Indian Council of Agricultural Research (ICAR) here today. He emphasised on enhancing the reach of technologies amongst farmers and reach out to maximum number of farmers through the network of ICAR and Krishi Vigyan Kendras (KVKs).

ICAR has developed 1234 crop varieties and 345 horticultural varieties during 2014-19. Many of the ICAR varieties and technologies are earning foreign exchange and contributing towards food security of the country. ICAR and KVKs have contributed positively in implementation of different Government Special campaigns like Krishi Kalyan Abhiyan, Jalshakti Abhiyan, tree plantation campaign and International Women’s Day celebrations.

The Krishi Kalyan Abhiyan (KKA) is being implemented in 112 Aspirational districts of the country. So far two phases of Krishi Kalyan Abhiyan have been completed in which 11.05 lakh farmers were trained by KVKs and over 5000 frontline demonstrations at farmer’s field were conducted. In the third phase of KKA training of about 17 lakh farmers on diversified farming practices for doubling farmers’ income is planned. ICAR also sensitised and mobilised the farmers for water conservation measures during Jalshakti Abhiyan through 466 melas organised by 243 KVKs in which about 3.14 lakh farmers and school children participated in the two phases of the Abhiyan. More than 7.1 lakh tree saplings were planted under tree plantation campaign in which public leadership took active part with the participation of 34 MPs, 50 MLAs and 2000 other VIPs and Officials.

ICAR has developed 66 vaccines & diagnostics during 2014-19 for the diagnosis and control of diseases of animals. For the first time in India, gazette notification of 184 registered indigenous breeds was done in 2019 that will help protecting and promotion of indigenous breeds. Open-sea cage culture technology was extended for fish production in more than 2500 cages in East and West coast during last five years and 22 cost effective feeds were developed for different life stages of important fish/finfish species. ICAR in a joint effort with States and Department of Agriculture, Cooperation & Farmers’ Welfare helped in distribution of machines to farmers and Custom Hiring Centres for in-situ management of crop residues. The number of burning incidences has reduced by 52% in 2019 compared with the incidences in 2016.

ICAR proactively worked for the prevention of stress to farmers due to COVID-19. Advisory to farmers in 15 regional languages were communicated to over 5.48 crore farmers. About 42.7 lakh farmers were sensitized for use of Arogya Setu mobile application to fight COVID 19 pandemic and 4.33 lakh farmers have downloaded the application. ICAR’s three institutes NIHSAD Bhopal, IVRI Izatnagar, and NRC on Equines, Hissar were notified for COVID-19 testing in humans and Zoo animals. Till date 1561 samples have been tested by these institutes.

The Union Minster, while appreciating the works of ICAR, emphasised to strengthen the research and extension system to reach to the maximum number of farmers and solving the problems in farming. He particularly stated to concentrate on diverse commodities, undertake intensive research on water science and technology, development of processable and export oriented varieties in potato, organise a conference on agri-startup to select the best and promote them and popularization of KVK-SHG model through print and social media to create awareness and scale out the model. The Union Agriculture Minister also emphasized for the maximum use of the IT tools in Agriculture including the higher education and promote e-publications. Shri Tomar emphasized to use of the strength of KVK in creating awareness amongst farmers about soil health management and soil testing. Recognizing that seed is the prime input, he suggested preparing a roadmap for seed availability.

The Ministers of State, Shri Parshottam Rupala and Shri Kailash Choudhary were present in the review meeting. Secretary, DARE & DG, ICAR, Dr. Trilochan Mohapatra along with top officials of DARE and ICAR attended the meeting. The meeting was held following the norms of social distancing and face masks. ICAR is an umbrella organisation under which 102 institutes and 718 KVKs, one in each district function. Over the years the ICAR and KVKs reach to the farmers has increased manifold.

India has acquired enough strength and resources to take on the worst challenge thrown by the corona virus: Dr. Harsh Vardhan