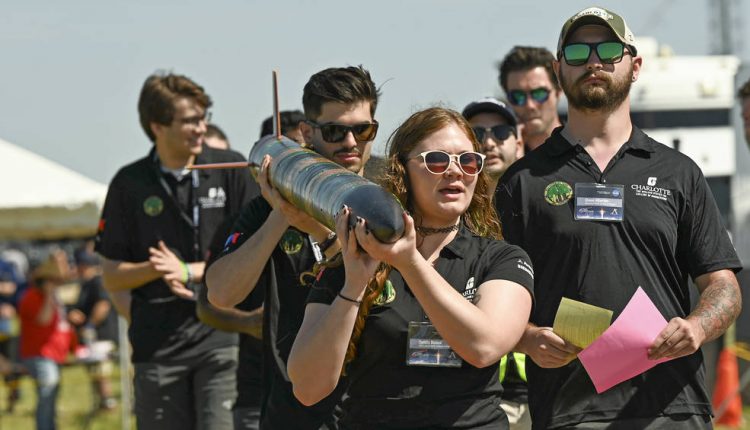 For the second year in a row, The University of North Carolina at Charlotte won the launch division, while Tarleton State University in Stephenville, Texas, won first place in the design division of NASA’s 2022 Student Launch rocketry competition. NASA announced the winners Thursday during a live virtual ceremony.

Each year, NASA challenges middle school, high school, college, and university students from across the United States to design, build and launch a high-powered amateur rocket, fly it to an altitude between 4,000 and 6,000 feet, and make a successful landing.

“Programs like NASA’s Student Launch are part of a greater process to prepare a new generation of scientists, engineers, astronauts, and explorers to pick up the torch and carry out the next missions. These students are the next generation – the Artemis Generation,” NASA Deputy Administrator Pam Melroy told the teams. “There are so many opportunities before them, and they should be so proud of what they’ve accomplished and learned in Student Launch. I encourage all of our participants to maintain a curiosity to learn and to explore.”

Sixty teams from 22 states including Puerto Rico took part in this year’s competition, with 27 teams launching April 23 near NASA’s Marshall Space Flight Center in Huntsville, Alabama. Teams that did not travel were allowed to conduct their final test flights at a home launch field.

“We were thrilled both for the teams that were able to join us for the first Huntsville launch since 2019 and those that launched from a home field,” said Fred Kepner, an education program specialist and activity lead for Student Launch at Marshall. “The teams’ ability to adjust and conduct flights from the location that best suited their situation was another sign of their innovative spirit and drive to succeed.”

Teams in the college/university division tackled a new task that mirrors NASA’s missions like the Mars Curiosity Rover. Teams had to design a payload capable of autonomously locating where their rocket landed by identifying the rocket’s grid position on an aerial image of the launch site while transmitting the data back to their ground station. This had to be accomplished without the use of GPS. The requirement simulates a challenge faced by NASA’s mission managers – communicating with spacecraft and payloads on distant planetary bodies, where use of GPS is not an option. Middle and high school teams could choose to attempt the college/university division challenge or develop their own science or engineering experiment.

The top five teams in the launch division are:

The top two teams in the design division are:

For over 20 years, Student Launch has provided a realistic experience to students that resembles the development, test, and operational lifecycle NASA and industry engineers use when developing and operating new hardware. Marshall hosts Student Launch, and NASA’s Southeast Regional Office of STEM Engagement manages the event, which is one of the agency’s Artemis Student Challenges. These activities stimulate innovation and advance NASA’s human exploration mission through collaboration with educational institutions and students – the Artemis Generation, who will help NASA explore the Moon and Mars. NASA’s Space Operations Mission Directorate and Office of STEM Engagement, along with Northrop Grumman, provide funding and leadership for the initiative.

India Education Diary Bureau Admin Jun 5, 2022
REASI : Under the able aegis of NALSA and as per the Action Plan issued by the J&K Legal Services…