Expedition 65 astronauts will conduct two spacewalks – one Wednesday, June 16, and the other Sunday, June 20 – to install new solar arrays to help power the International Space Station. NASA will discuss the upcoming spacewalks during a news conference at 2 p.m. EDT Monday, June 14. Live coverage of the news conference and spacewalks will air on NASA Television, the agency’s website, and the NASA app.

NASA flight engineer Shane Kimbrough and ESA (European Space Agency) astronaut Thomas Pesquet will conduct both spacewalks, which will be the 239th and 240th in support of station assembly, maintenance, and upgrades.

Reporters who wish to participate in the news conference at NASA’s Johnson Space Center in Houston by telephone must call the Johnson newsroom at: 281-483-5111 no later than 4 p.m. Friday, June 11. Due to safety restrictions related to the ongoing coronavirus (COVID-19) pandemic, reporters will not be invited to attend briefings on-site at NASA centers. Those following the briefing on social media may ask questions using #AskNASA.

Live coverage of the spacewalks will begin at 6:30 a.m. EDT on the day of each spacewalk, with the crew members scheduled to exit the station’s Quest airlock around 8 a.m. Each spacewalk will last approximately 6 hours, 30 minutes. 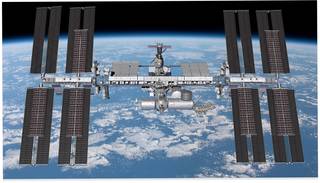 Six iROSA solar arrays in the planned configuration will augment the power drawn from the existing arrays on the International Space Station. Power channels shown are 1A, 2B, 3A, 3B, 4A, and 4B. During the June 16 spacewalk, NASA astronaut Shane Kimbrough and ESA (European Space Agency) astronaut Thomas Pesquet will install the 2B array (depicted on the upper far right), followed by a spacewalk June 20 during which the pair will install the 4B array (depicted in the lower far right).
Credits: NASA

The solar arrays arrived at the station in the SpaceX Dragon cargo spacecraft as part of the company’s 22nd commercial resupply services mission to the station. Operators in the Mission Control Center at Johnson are scheduled to use the station’s robotic Canadarm2 to extract the solar arrays from Dragon’s trunk Thursday, June 10, in advance of installation during the spacewalks.

The spacewalks will be the seventh and eighth for Kimbrough, and the third and fourth for Pesquet. These will also be the third and fourth spacewalks Kimbrough and Pesquet will conduct together, following two Expedition 50 spacewalks in January and March 2017. During the 2017 spacewalks, they continued replacing nickel-hydrogen batteries with new lithium-ion batteries on the P4 truss, lubricated the Canadarm2 Latching End Effector, and conducted external work to prepare for installation of International Docking Adapter-3.

The current solar arrays are functioning well but have begun to show signs of degradation, as expected, since they were designed for a 15-year service life. The first pair of the space station’s original solar arrays were deployed in December 2000 and have been powering the station for more than 20 years. The new solar arrays will be positioned in front of six of the current arrays, increasing the station’s total available power from 160 kilowatts to a maximum of 215 kilowatts. The same solar array design will be used to power elements of the agency’s Gateway lunar outpost.

In November 2020, the International Space Station surpassed its 20-year milestone of continuous human presence, providing opportunities for unique research and technological demonstrations that help prepare for long-duration missions to the Moon and Mars and also improve life on Earth. In that time, 244 people from 19 countries have visited the orbiting laboratory that has hosted nearly 3,000 research investigations from researchers in 108 countries and areas.