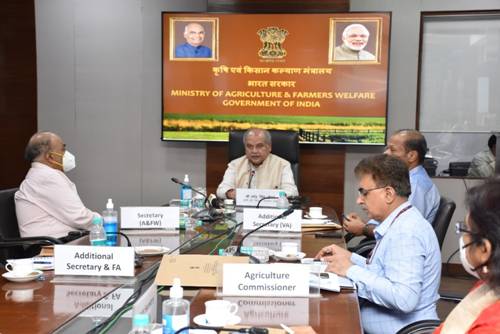 New Delhi: Inaugurating the National Conference on Agriculture for Rabi campaign 2021-22 through Video Conferencing, Union Agriculture Minister Shri Narendra Singh Tomar said the Central Government is fully committed to supporting the States to increase production and productivity and to face the challenges posed by climate change and rainfed agriculture. He stated that Prime Minister has always aimed to protect and support farmers and several steps have been taken to make an ‘Aatmanirbhar Kisan’.

The Minister urged the States to use water, electricity and fertilizers judiciously and to use Nano-urea which is less costly and beneficial for land fertility. The Minister also said that KVKs Krishi Vigyan Kendras should reach out to the small farmers so that they can benefit from various schemes of the government. The States should also ensure that PM Kisan and KCC should reach every farmer. More than 2.25 crore KCCs have been distributed, through which farmers have been given loans of more than Rs.2.25 lakh crore. He also said that the PM Fasal Bima Yojana has provided protective cover for the farmers.

The objective of this conference was to review and assess the crop performance during the preceding crop season and fix crop-wise targets for Rabi season in consultation with State Governments, ensure supply of critical inputs and facilitate adoption of innovative technologies with a view to enhance production and productivity of the crops.  The priority of government is to increase production of oilseeds and pulses.

Making a detailed presentation on the strategies for crop management in Rabi season, Dr. S. K. Malhotra, Agriculture Commissioner said that country has recorded all time high food grain and oilseeds production due to timely interventions of the government.  Now, special focus is given on oilseeds, pulses and Nutri-cereals. He explained the crop production targets for 2021-22. 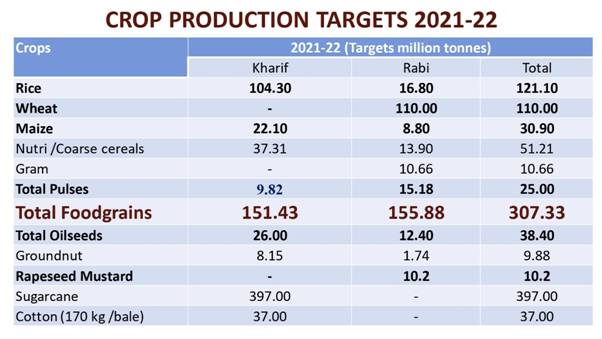 In his presentation, he also explained the requirement & availability of seeds for Rabi 2021-22 and requirement and consumption of fertilizers. 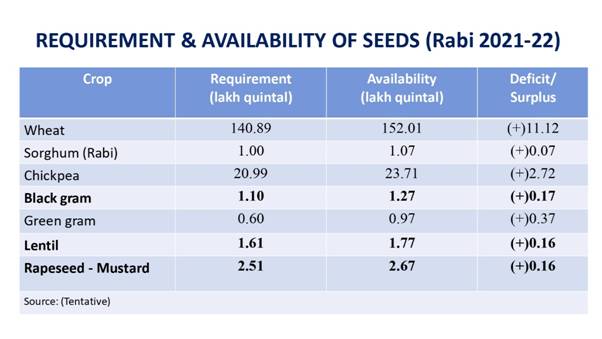 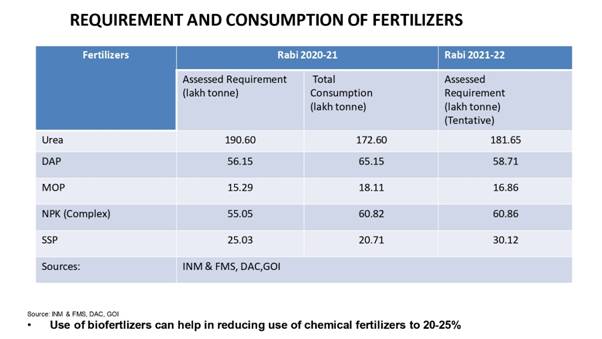 Sushri Shobha Karandlaje, Union Minister for State (A&FW) said that the States should ensure that the quality seeds and fertilizers are provided to farmers.

Special campaign will be launched to increase production of oilseeds in Rabi season with focus on Mustard, sunflower and oil palm. Recently launched Oil Palm Mission will bring additional 6.50 lakh ha under oil palm plantation in the states of Andhra Pradesh, Telangana, Karnataka, Tamil Nadu, Odisha, Gujarat and Chattisgarh, North – Eastern states and Andaman & Nicobar. This will result in increase the area of oil palm by 6.5 lakh hectares to reach 10.00 lakh hectares by 2025-26 (out of which 3.22 lakh hectares is for the Rest of India and 3.38 lakh hectares for the North East), and 16.71 lakh ha by 2029-30. Crude palm oil (CPO) production is expected to increase to 11.20 lakh tonnes in 2025-26 and up to 28.11 lakh tonnes in 2029-30. Special Mustard will be taken in major 11 rapeseed and mustard growing states to increase productivity. Only new varieties having yield potential with more than 20 q/ha will be distributed as seed minikits to popularize new varieties and increase productivity. Sunflower will also remain in focus with emphasis on hybrid varieties.