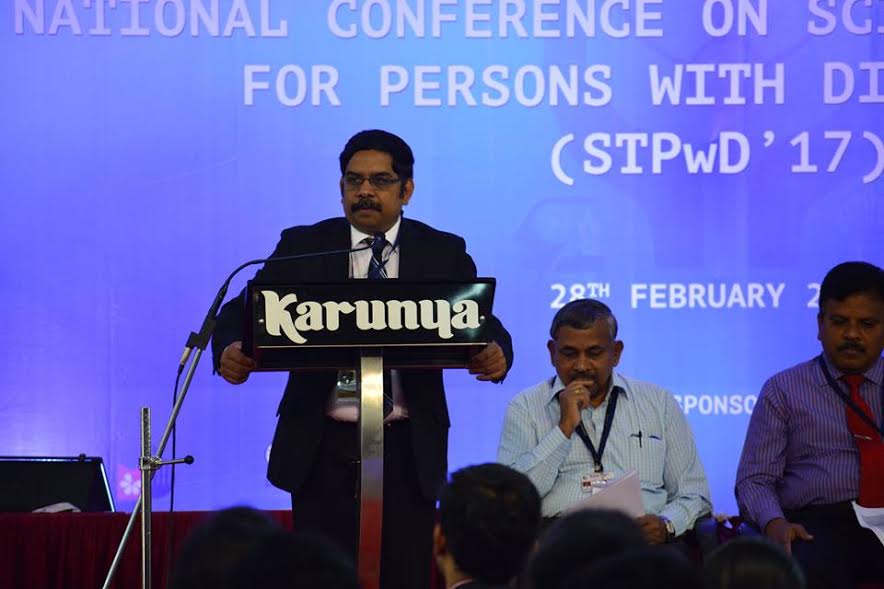 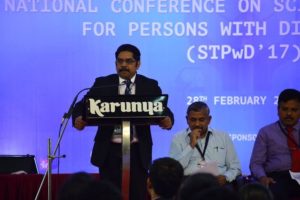 Chennai: Karunya University and Samithi for Education, Environment, Social and Health Action (SEESHA) has been innovating bio medical technologies for the last 6 years with bio medical products reaching the community. Department of Science and Technology, Government of India, New Delhi has Themed February 28th the National Science Day this year as “Science and Technology for Persons with Disabilities”. A National Conference to commemorate the National Science day on “Science and Technology for Specially Abled Persons” on the February 28th at Karunya University, Coimbatore was organised jointly by Karunya and SEESHA.
Scientist, Technologist, Academicians, Industrial Partners along with Professionals using Technologist, Differently Abled Persons and Vendors appraised the existing Assistive Technology and reviewed the challenges in today’s context.
The conference started with Dr. C Joseph Kennady, Registrar Karunya University welcoming the Speakers and the delegates, stating that this was the beginning of a series of Conferences and workshops to be conducted.
Dr S Sundar Manoharan, Vice Chancellor, Karunya University gave a background of how our honorable Prime Minister recognizing the dearth of Assistive Devices and Technology in our country, had asked the Department of Science and Technology to ear mark funds to Develop Technology to reach the Persons who are Differently Abled.
Eminent speakers both able bodied and differently abled were present
Dr. Joe Ajay, representing EOS India, showed a paradigm shift in Technology where 3D printing will revolutionize the methodology in manufacturing Assistive Devices, quoting the example of the human vertebrae.
Dr. Rama Subba Reddy, brought out the effects of how a cochlear implant would make a person with severe hearing loss hear.
Dr. Dobson Dominic, HOD – PMR and Sports Medicine Consultant showed Ergonomic chairs is not only required for persons especially in the corporate and sectors where computers have become a mainstay, but also with minimal adaptations could be used as a therapeutic tool for Differently Abled.
Mr. Manjunath Rama Reddy, a person who uses a motorized wheel chair spoke about how it has brought him of a cocoon and he is free to move around in a place like Bangalore. Re congratulated the Metros universal design where it can be utilized by every citizen of Bangalore irrespective of their ability.
Mr Prashant, Dr. Chetan, who are different abled, used Laptops with special apps , to be able to communicate to the delegates where they keyed in their answers in word format and this was translated to a voice output. Mr. Nishant used an IPAD to with Clicker 5 which is a word recognition software, to communicate.
Mrs. Priya Rao Special Educator, Associate Director, Spastics Society of Karnataka Bangalore and her Colleague Mrs. Kumuda spoke on how available low cost technology was being used and the need of more low cost technology which is needed for our country. They spoke that giving an assistive Technology was not sufficient but, the teachers in the schools needed to be trained.
Mrs. Akila Vaidyanathan, Founder Chair Person Amaze Charitable Trust. Show cased many Assistive Technology which is used in our country but stressed that as they were from abroad that they were expensive and are not able to reach persons all over the country.
Mr. Bhargav Sundram, manufacturer and vendor Callidai Motor Works Ltd, stated data about users available was less and not reliable and he was looking for support from Academic institutions and the Government.
Mr. Sama Raju, from Mobility India spoke about that only 5% to 15 % of the Differently Abled had access to Assistive Devices. According to the Wheel chair guidelines by WHO wheel chairs are a prescribed equipment and wheel chairs should be according to the needs of the client.

University of Copenhagen: New intervention to strengthen efforts against diabetes in…

University of Copenhagen: The early Earth may have behaved more like Venus

J&K first to release Good Governance Index in the country