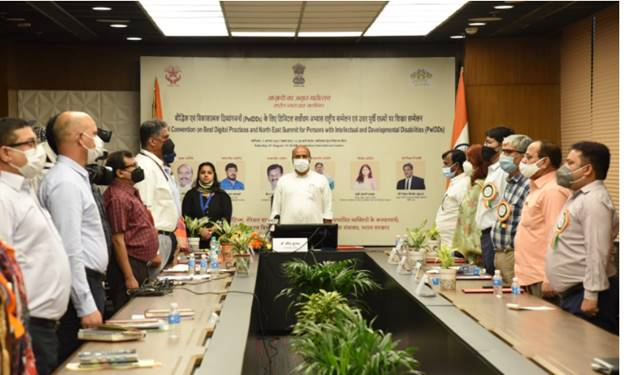 In the first of its kind, the summit was organized for the Seven States in North East Region of the Country. Celebrating the 75th year of Independence of the country (Azaadi Ka Amrit Mahotsav), the aim of the summit was to empower persons with Intellectual and Developmental Disabilities on Digital Technology and increase the footfall of the schemes and activities of the National Trust in the region. The Conventions was graced by Dr. Virendra Kumar, Minister Social Justice and Empowerment as Chief Guest, Ministers of States Km. Pratima Bhoumik and Sh. A. Narayanaswamy as Guest of Honour. Ms. Anjali Bhawra, Secretary, DEPwD and Chairperson, National Trust, Sh. Nikunja Kishore Sundaray, JS&CEO, National Trust and Sh. Kishore Baburao Surwade, DDG, DEPwD were also present in the Convention which was attended by more than 100 persons representing organizations, professionals and Divyangjan from the Region.

Union Minister Dr. Virendra Kumar, in a very humble manner, appreciated the Convention. He told the Department to spread this convention to the entire country with more participation of Divyangjan as he truly believed that nothing could be discussed without the presence of the real stakeholders i.e. Divyangjan. He appealed all the public representatives to spread this message in the country. He appreciated the zeal and enthusiasm of Dr. Sapam Jasowanta Singh, a person with Visual Impairment and Board Member, National Trust in putting forth the need of Education for Divyangjan. He appreciated the Sign Language Interpreter work and said that with the help of this interpreter the message of this convention is reaching to all Divyangjan across the country.

Unique initiative to use state-of-the-art technology in…

In her address, Minister of State, Kum. Pratima Bhoumik highlighted the rich cultural and religious heritage of the North East and the vast diversity of Tribal population. She further said, we are fortunate to serve these people and we should work towards spreading awareness so that DIvyangjan can be given better services. She emphasized all NGOs to come forward and enroll Diyangjan in Niramaya Health Insurance Scheme, which is free of cost for the North East Region.

Sh. A Narayanswamy, Minister of State stated that the various schemes of the National Trust meant for all age groups need to be expanded to the entire country. More awareness generation is the need of the hour to reach the last Divyangjan to be served.

The representative of the Seven North Eastern States highlighted that convergence of the schemes of the Government is extensively needed. The Anganwadis of Ministry of Women and Child Development need to be collaborated with the Disha Early Intervention Centers of the National trust to reach the rural population of the North East. They pledged to take forward the mission with more zeal.

The inaugural session was followed by the technical session. The highlight of the summit was the presentation by Prof. (Dr.) Madhusudan Rao, IIT Delhi who shared the Research and Innovation for Product Development for Divyangjan. Prof. Rao is a well – known name in development of assistive technologies for empowerment of visually challenged. He is a national award winning scientist working on improving accessibility for Divyangjan. Besides, Prof. Ravi Poovaiah and Dr Ajanta Sen from IIT Mumbai presented the Jellow-an AAC Communicator for Children with Speech Disability. Other panelists included Sh. Nipun Malhotra, co-founder and CEO of the Nipman Foundation that works in the area of health and advocacy for Persons with Disabilities, Dr. Jinamoni Saikia, Principal Scientist, Assam Agricultural University who shared the status of development of Children with Disabilities in the North East region and Dr Sapam Jasowanta Singh, Board Member National Trust who shared overall status of Divyangjan in North Eastern States.

Indonesia: After 18 months of school closures, children must safely…