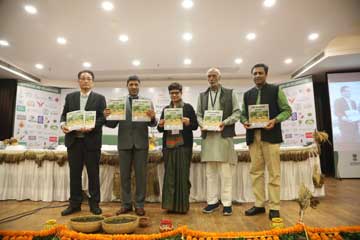 The two-day convention on Rain-fed agriculture, saw the participation of over 450 farmers, policy makers, researchers, academicians and civil society practitioners across the country. The participants shared their experiences and spoke about policy priorities for rainfed agriculture to address agrarian crisis.

The main aim of the convention is to discuss themes of Rainfed agriculture, build a consensus and emphasize the necessity for differential policies and programmes- both at the Centre and the State. The focus is to identify Rainfed agriculture as an issue of national importance.

Apart from an inaugural and a plenary session, the thought-provoking convention witnessed various theme-based sessions such as Agroecology and Living Soils – The Policy Problem, Alternative Budgetary Framework for Rainfed Agriculture, Draught Animal Use in Rainfed Agriculture – Potential and Policy Imperatives and Evolving Appropriate Seed Systems for Climate Resilient Agriculture to Stimulate Growth, spread over two days.

According to National Rainfed Area Authority (2012), out of 593 districts in India, 499 districts are rainfed. Rainfed areas contribute significantly to food production – as high as 89% of millets, 88% of pulses, 73% of cotton, 69% of oil seeds, and 40% of rice are produced by Rainfed farmers in the country. Rainfed areas in the country support 64% cattle, 74% sheep and 78% goat population, which are critical for food and nutritional security in India.

“India ranks first in Rainfed agriculture, both in area and value of produce. More than 60% farmers are dependent on rainfed agriculture for their livelihood. Over the years, farmers in rainfed areas have been facing several adversities such as climate variability, crop failure, non-remunerative prices etc. Rainfed agriculture has historically been at the receiving end of imbalances in terms of policy and pubic investments,” Mr Sabyasachi Das, National Coordinator of RRA Network said.

Addressing the two-day convention, Mr Das said there is an historical imbalance in public investments. Drawing the attention of policy makers and academicians, he pointed out that Rs 5,40,000 crores had been spent on procuring rice and wheat at MSP (Minimum Support Price) between 2003-2004 and 2012-2013, whereas, Government expenditure on procurement of major rainfed crops such as coarse cereals, millets and pulses during the same period was merely Rs 3,200 crores.”

RRA Network and its members in collaboration with several state governments have demonstrated that comprehensive investment supported by appropriate policy framework can bring significant changes in rainfed areas.

University of Minnesota: In Florida panther, multi-pronged approach critical to…

iednewsdesk May 3, 2022
The Princeton Review has once again named William & Mary the best public university in the nation for…