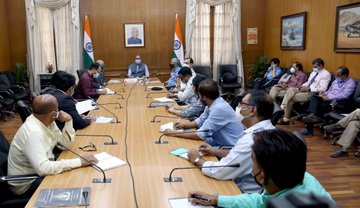 New Delhi: The National Defence College (NDC), as part its Diamond Jubilee celebrations will organise a two day Webinar on 05-06 Nov 20 with the theme ‘India’s National Security- a Decade Ahead’. This was announced by Defence Secretary Dr Ajay Kumar and Commandant of NDC, Air Marshal D Choudhury at a press conference in New Delhi today.

Dr Ajay Kumar said NDC is one of the leading institutions of the world dedicated to intellectual development and strategic training of select senior officers of Armed Forces and Civil Services of India and those of foreign countries. The first NDC course was held in 1960 with 21 participants. In the Diamond Jubilee Year NDC has 100 participants; 75 from India and 25 from friendly countries. He said it is the most prestigious program for higher management both, in Armed Forces and Civil Services. NDC program has had very illustrious alumni. Currently, CDS, two Governors, present National Security Advisor, two Election Commissioners, 30 Service Chiefs and 74 Foreign Service officers, over 20 Ambassadors, 4 Defence Secretaries, 5 Foreign Secretaries are alumni of NDC.

Some of foreign alumni have also achieved significant positions in their respective countries. 74 Chiefs of the Staff of foreign Armed Forces. Some prominent among them are:

1. His Majesty Jigme Khesar Namgyel Wangchuck, The King of Bhutan

The theme of the two day webinar is “India’s National Security – The Decade Ahead”. It will commence tomorrow with Keynote Address by Shri Rajnath Singh, Hon’ble Raksha Mantri. Some of the key speakers include:

 Chiefs of the Armed Forces

Defence Secretary Dr Ajay Kumar said NDC is among the most sought after programe of its kind of the world. To cater to continuous demand for more seats from other countries, Ministry of Defence has decided to increase capacity of NDC from 100 to 110 in 2021 and to 120 in 2022. He said “We will be able to offer more seats to friendly foreign countries from where demand is huge. Necessary infrastructure in this regard is being created. We are going to give additional seats to Nepal, Myanmar, Bangladesh apart from new seats to Uzbekistan, Tajikistan Phillipines, Indonesia and Maldives.”

To commemorate the Diamond Jubilee Year, HE President of India has kindly consented to institute a President’s Chair of Excellence on National Security and Strategy at NDC. This will be operational from NDC 20201. A e-book on NDC titled “NDC – Abode of Strategic Excellence” will be released by Hon’ble Raksha Mantri on this occasion.

Commandant of NDC, Air Marshal D Choudhury said, despite the COVID-19 constraints, NDC continued its program online w.e.f. March 2020. It is remarkable that full course curriculum has been accomplished without dilution, he added.

iednewsdesk Apr 6, 2022
Researchers at Weill Cornell Medicine have identified a key protein that induces the program to build specialized…

JK IMPARD, NCGG to collaborate for DARPG training of fresh batches of…