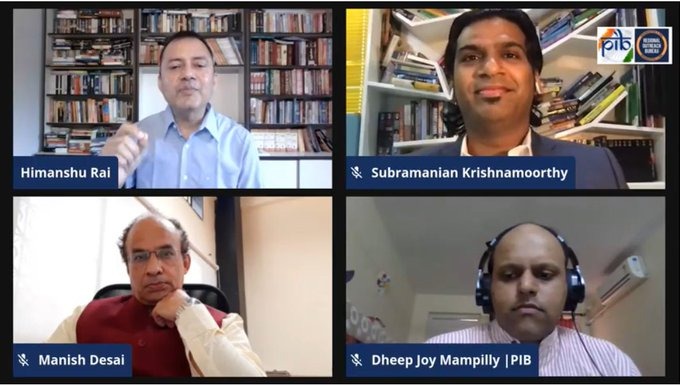 Mumbai: The focus on multiple subjects, multiple themes, multiple languages is the biggest strength that NEP 2020 will bring to our country, said Prof. Himanshu Rai, Director, IIM Indore, during the course of a webinar titled “National Education Policy 2020: A New Vision for Higher Education in India”, organized today (August 18, 2020), by Regional Outreach Bureau Maharashtra & Goa, in association with Press Information Bureau, Western Region. The other expert panellist, Mr. Subramanian Krishnamoorthy, Educationist and CEO, Meccademia Education Group, Dubai presented his critique of the new policy with the help of thought-provoking anecdotes from across the world.

Speaking on NEP 2020’s provisions for primary level education, Prof. Rai opined, “The fact that we have brought pre-primary education into the ambit of NEP 2020 does two things: firstly, pre-primary education being predominantly in the unorganised sector was prone to a lot of misuse and corrupt methods. Now that should be taken care of. Secondly, now, the mid-day meal will be available even to pre-primary school children. That’s a good thing because if you provide nutrition to children at the age of three, then you are ensuring that the brain develops well. This is the biggest positive change that NEP 2020 is ushering in, at the school and pre-primary level”.

In the sphere of higher education, Prof. Rai appreciated the creation of the academic credit bank. “Many a time people want to take a break, either because of personal reasons or financial reasons. In such cases, students will be able to resume studies from where they left because their previous credit will be in the bank. Some people said that it may lead to higher dropout. I find that argument bizarre, the flexibility will lead only to higher enrolment”.

The IIM Indore Director said that National Research Foundation is an extremely important step. “NRF allows us to collaborate and, in addition, allowing top 100 institutions of the world to open their campuses in India is also a positive step. This has been criticised saying that the cost of education will go up. But, I think that the moment you bring in universities from abroad into the country, it is going to increase competition. It is going to bring in the best practices and therefore, it is going to put a pressure on the institutions in India to actually up their game and, simultaneously, they will have to make sure that their fees are controlled. The moment we bring in foreign universities, education is going to become far better, world-class and contextual. Just one red-flag over there: we need to ensure whatever remittances those foreign universities are creating should stay in the country and are used for development of higher education here. Therefore, some kind of regulatory framework may be required for those universities which are planning to set up their campuses in India”.

For ‘Transfer of Technology’ of a revolutionary Nano Urea…

All India Institute of Ayurveda (AIIA) to present Success of…

On internship opportunities for children at a younger age, he said, it will introduce the children to the skills that they should be readying themselves for. “One of the big lacunae in the previous education policies was that, although we were educating people, we were not making them employable”, said the Professor and ruled out the concern that this may lead to child labour.

Reflecting on NEP’s goal of building large multidisciplinary universities in each and every district of the country and on the aim to increase Gross Enrolment Ratio in higher education to more than 50%., Mr. Krishnamoorthy said, “a huge contribution in it would come from the people of determination, i.e., the students coming from under-privileged backgrounds, disadvantaged areas as well as the specially abled students and thus, physical infrastructures and appropriate learning materials will have to be built for them. This small paragraph in the whole policy will go a long way in fostering care for each other”. He further stated that, in a country like India where a huge proportion of the population are daily wage earners, going to a university full-time will remain a privilege, at least, for the next couple of decades. The stress in NEP on open distance learning and on increasing the quality of education in open distance learning to a level where it is almost similar to studying in a premier institute is an important step in that direction.

Appreciating the NEP’s emphasis on vocational education, Mr. Krishnamoorthy said that vocational Education in India is highly de-glamourized; he said It is important to bring back the glamour to this vocation. Check out the presentation given by Mr. Krishnamoorthy, here.

This apart, both the guest speakers favoured the provision for grant of autonomy for institutions of national importance such as IIMs and IITs, saying it would help these institutes to excel further and realize their true potential.. Prof. Rai also welcomed the proposal to set up Higher Education Commission of India as an umbrella regulator but cautioned that such a body should not become a control freak institution.

Manish Desai, DG West Zone of PIB in his introductory remarks highlighted various much-needed reforms being brought about by the National Education Policy 2020 and explained the consultation process undertaken by Government of India in framing the new policy. The webinar was moderated by Dheep Joy Mampilly of PIB Mumbai and attended by a large number of students, media persons from Maharashtra and Madhya Pradesh and some participants from UAE as well.

For ‘Transfer of Technology’ of a revolutionary Nano Urea Liquid fertiliser, NFL and…