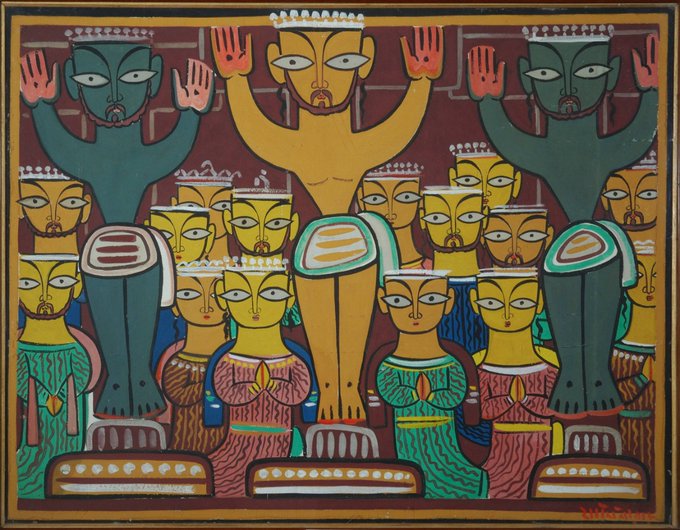 New Delhi: National Gallery of Modern Art pays tribute to the pioneering artist Jamini Roy on his 133rd Birth Anniversary year through virtual tour. This virtual tour of Jamini Roy (http://www.ngmaindia.gov.in/virtual-tour-of-modern-art-1.asp) has been represented in nine segments (Bird & Beast, Calligraphy & Sketches, Epic Myth & Folk Cults, Krishna Leela, Life of Christ, Mother & Child, Portrait & Landscapes, Santhals, Village life & Women) showing the variations of mood in his creation, showing 203 out of 215 art works from the permanent collection of NGMA. This virtual tour of the entire art works of the pioneering artist would certainly enrich the art lovers, is happening for the first time in India.

Due to the threat posed by the NOVEL CORONA VIRUS (COVID-2019) which has been declared a PANDEMIC by the WHO and following the advice of the Ministry of Health & Family Welfare, Government of India, the Museum and Library is closed for public access till further order.

Director General, NGMA, Shri AdwaitaGadanayak said, “Its our endeavor to pay tribute to Jamini Roy – the pioneering artist of this country. Therefore, on his 133rd Birth Anniversary year (11.04.1887 – 24.04.1972), NGMA presents the life and art works of Jamini Roy through this Virtual Tour for the visitors to enjoy without even physically coming down to the location these days. I hope visitors would certainly be enjoying the colorful journey through these artworks. There will be many more landmark virtualtours, launched on our site in the coming days”. This is its second biggest attempt of creating such Virtual Tour, conceptualized, designed and developed by the IT Cell of NGMA.

Jamini Roy was one of the earliest and most significant modernists of twentieth century Indian art. From 1920 onwards his search for the essence of form led him to experiment with dramatically different visual style. His career spanning over nearly six decades had many significant turning points and his works collectively speak of the nature of his modernism and the prominent role he played in breaking away from the art practices of his time. Trained in the British academic style of painting in the early decades of the twentieth century, Jamini Roy became well-known as a skilful portraitist. He received regular commissions after he graduated from the Government Art School in what is now Kolkata, in 1916. The first three decades of the twentieth century saw a sea-change in cultural expressions in Bengal. The growing surge of the nationalist movement was prompting all kinds of experiments in literature and the visual arts. The Bengal School, founded by Abanindranath Tagore and Kala Bhavana in Santiniketan under Nandalal Bose rejected European naturalism and the use of oil as a medium and were exploring new ways of representation. Jamini Roy, too, consciously rejected the style he had mastered during his academic training and from the early 1920s searched for forms that stirred the innermost recesses of his being. He sought inspiration from sources as diverse as East Asian calligraphy, terracotta temple friezes, objects from folk arts and crafts traditions and the like.

From the end 1920s, Jamini Roy rejected the European oil medium and began to use the traditional pigments from vegetable and mineral sources. The imagery was often drawn from village life. Jamini Roy invested in the portrayal of peasants, artisans, followers of religious cults, village women and adivasis with immense dignity. He represented in his paintings what they held sacred with references from folk tales and narratives that permeated the rural consciousness. In this particular painting titled ‘Woman’ the artist has painted the figure of a woman against a red background with thick, black contouring lines. The simplification of form suggests a sculptural quality, especially the structured drapery with an ornate border.

From 1924 onwards, Jamini Roy experimented with a new idiom as he was looking for ways to simplify form. During this time his images for the most part became either monochromatic bearing an austere play of white, soft grey and black or the palette was limited to the use of one or two colours. With a masterly control of the brush, he created contours of the form with fluid, calligraphic lines. Roy, during this phase painted seated female forms, mother and child figures, bauls, leaping deer, crawling infant.