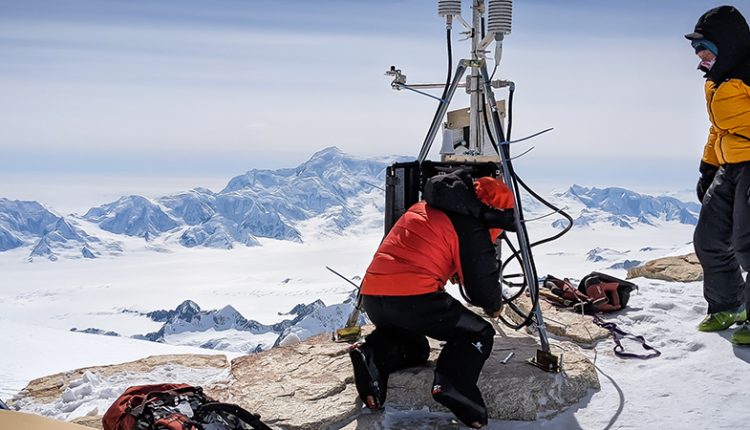 Washington  – Today, National Geographic Society announced a groundbreaking expedition to the summit plateau of Mount Logan, the highest peak in Canada, to recover one of the oldest ice cores in North America. This effort is part of the National Geographic and Rolex Perpetual Planet Expeditions partnership and complements previous expeditions to high mountain environments, including to Mt. Everest in 2019 and Tupungato Volcano in 2021. Rolex supports these expeditions as part of its Perpetual Planet initiative.

Mount Logan’s high summit plateau likely contains some of the oldest non-polar ice in the world (~30,000 years), housing one of the most important climate records on the continent. The glacier across Mount Logan’s summit plateau is uniquely located along the North Pacific storm track, resulting in high snow accumulation unaffected by summer melt due to low mean annual temperatures. These conditions are comparable only to the glacial ice core records of Greenland and Antarctica and provide an exceptionally preserved record of annual snowfall that has formed the icefield since the last glacial period.

The goal of the expedition is to retrieve a 250-300 meter (~900 foot) deep ice core that will likely provide an exceptionally well-preserved climate record, containing tens of thousands of years worth of data including records of past temperature, nearby sea surface conditions, volcanic ash fallout, and wildfire history. An analysis of this ice core data will also reveal how climate change is impacting even the world’s highest peaks.

In a daring feat, over the approximately six-week expedition, National Geographic Explorer and Director of the Canadian Ice Core Lab at the University of Alberta, Dr. Alison Criscitiello and her team of six high-alpine scientists will first fly to the 10,000 foot base camp on Mount Logan to begin acclimatizing to the high altitudes to come, and then the team will battle -20 to -40 C temperatures, strong winds, complex icefalls, and intense snowfall to climb the mountain via the King’s Trench mountaineering route to the summit plateau. As the team ascends, state of the art ice coring equipment, including a custom ice core drill specifically made with unique features to accommodate this expedition, will be transported to the high-altitude coring site via helicopter.

“High mountain environments remain understudied and under-sampled in large part due to the difficulties of conducting science in such extreme conditions,” said Dr. Criscitiello. “This expedition is a daunting dream come true. It brings together my high-altitude mountaineering background with my scientific passion, allowing us to study difficult-to-obtain historical climate records to better understand the past, so that we can better prepare for the future.”

Mount Logan is located in the heart of the Saint Elias Mountains in Kluane National Park and Reserve and falls within the traditional territories of the Champagne and Aishihik, Kluane, and White River First Nations. Its 20km long summit plateau is unique; it is one of only a handful of places outside of the polar regions where the ice does not melt in the summer months, thereby ensuring a long climate record is preserved in the ice.

In May 2021, Dr. Criscitiello and her colleague Rebecca Haspel, supported by fellow mountaineers Zac Robinson and Toby Harper-Merrett, laid the groundwork for the ice core extraction by conducting radar surveys to pinpoint the ideal ice drilling location. In addition to these surveys, the team placed a high-precision automated weather station high on Mount Logan (at 5,640 meters/18,500 feet on Prospector-Russell (PR) Col). The weather station transmits open source, real-time data of air temperature, relative humidity, barometric pressure, solar radiation, and wind speed and direction to local communities, climbers, pilots, and scientists. Initially, Dr. Criscitiello received a one-year permit from Parks Canada and the local First Nations for the weather station to remain on PR Col. However, given the value of the data to so many people across so many communities, the permit has been extended five years. The 2021 expedition marked two significant milestones in that it was both the first high alpine radar survey expedition conducted solely by two female scientists and resulted in the installation of the highest weather station in North America.

These real-time measurements from the weather station installed last year combined with the historical data obtained from the ice core will paint a holistic picture of changes in the global climate as well as the direct impact of the intensified rate of warming at Mount Logan over time.

In addition to extracting the ice core, a second team led by Kira Holland, one of Dr. Criscitiello’s graduate students, will complete a simultaneous ancillary expedition focused on an elevation study of surface snowpack geochemistry relative to distance from the coastline. Holland’s work will focus on the most recent years of climate variations in the Icefield Ranges and will complement the historical data locked within the ice core Dr. Criscitiello will uncover.

By implementing one-of-a-kind technologies and cutting-edge analytical methods as well as elevating the work of two female scientists, this expedition goes beyond previous ice coring and climate studies on Logan to provide unprecedented data and diverse perspectives to the entire scientific community.

“It is increasingly important to support pioneering scientists like Dr. Criscitiello whose work is not only groundbreaking but inspirational to the next generation of female scientists, explorers, and leaders,” said Nicole Alexiev, Vice President of Science and Innovation at National Geographic Society. “Her groundbreaking 2021 expedition to Mount Logan’s peak to install the highest weather station in North America, and this new expedition to extract a nearly 300m deep ice core underscores our commitment to supporting exploration with a scientific purpose, a cornerstone of our partnership with Rolex.”