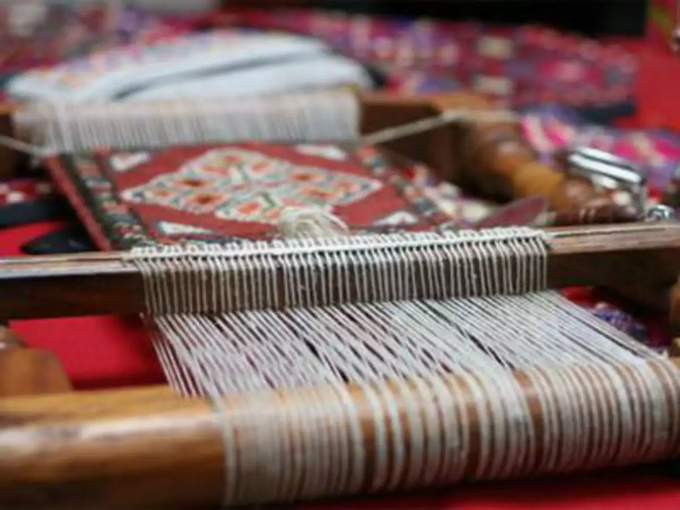 New Delhi: Handloom sector is a symbol of the country’s glorious cultural heritage and an important source of livelihood in the country. The sector is key to women empowerment as over 70% of handloom weavers and allied workers are women.

On the occasion of the 6thNational Handloom Day on 07th August 2020, Ministry of Textiles is organizing a function through Virtual Platform to avoid public gathering considering Covid-19 pandemic. Union Minister of Textiles and Women & Child Development, Smt Smriti Irani will grace the occasion as Chief Guest and Secretary Textiles. Shri Ravi Capoor will be the Guest of Honour for the function. Chief Minister of Himachal Pradesh, Shri Jai Ram Thakur will also be joining the function from Shimla, HP through virtual mode.

In addition, during the function, handloom clusters across India, NIFT campuses, all the 28 Weaver Service Centres(WSCs), National Handloom Development Corporation (NHDC), Handloom Export Promotion Council (HEPC), along with Craft Handloom village at Kullu (Himachal Pradesh), Textiles Committee at Mumbai, and Virtual Fairbeing organized by HEPC at Chennai will be connected online. Also, functions befitting the occasion will be organized in all the subordinate offices of Development Commissioner of Handlooms viz. WSCs and NHDC as also in various campuses of National Institutes of Fashion Technology (NIFT).

7th August was chosen as the National Handloom Day to commemorate the Swadeshi Movement which was launched on the same date in the year 1905. The objective is to generate awareness about Handloom Industry amongst public at large and its contribution to the socio-economic development.

To mark this occasion and to instil pride of workmanship of handloom weaving amongst citizens, social media campaign is planned for the handloom weaving community. Hon’ble Prime Minister has urged that it should be an endeavour on part of all of us to use Indian Handlooms and Handicrafts and also communicate to other people about them. The more the world knows about the richness and diversity of these products, the greater our artisans and weavers will benefit.

Minister of Textiles Smt Smriti Irani has appealed to all Hon’ble Central Government Ministers, Lieutenant Governors, Chief Ministers of States, Members of Parliament and eminent Industrialists with friends and family to express solidarity with the weaving community through their social media accounts so as to motivate others to do the same.

Ministry of Textiles has extended a similar request to Secretaries to the Govt. of India and equivalent level officers. Besides, all the Secretaries of the States, Exports Promotion Councils, Sister Textile Bodies like Central Silk Board, National Jute Board have been requested to amplify the Social Media Campaign under the common hashtag and inspiring associates and employees to embrace handloom fabric. The e-commerce entities, Retail Companies and Designer Bodies have also been requested to promote and amplify the efforts of Ministry of Textiles to promote Handloom products.

In the face of the unprecedented Covid-19 pandemic, and inability to hold conventional marketing events such as exhibitions, melas, etc., the Government is providing online marketing opportunities to weavers and handloom producers. By taking a step towards realizing “Atmanirbhar Bharat”, Handloom Export Promotion Council is organizing a Virtual Fair. The fair will connect more than 150 participants from different regions of the country showcasing their products with unique designs and skills.

The Indian Textile Sourcing Fair will be open on 7, 10 and 11th August. The show has already attracted considerable attention of the International Buyers. Exquisite Patolas, Paithanis, Ikats, Kandangis, Maheshwaris, Venkatagiris and numerous other GI tagged products will be on display for the International buying community to source their products directly from the masters themselves.

The schedule of activities for the National Handloom Day function being organized by the Ministry of Textiles on 07th August 2020 includesa presentation showcasing the Craft Handloom Village, Kullu, being established in association with District Administration, Kullu. Other events include launching of Mobile App & Backend Website for Handloom Mark Scheme (HLM), launching of My Handloom Portal, inauguration of Virtual Fair on linking Handloom exporters with prospective buyers being organized by HEPC at Chennai.

The first National Handloom Day was held on 7th August 2015 by Prime Minister Shri Narendra Modi in Chennai. On this day, the handloom weaving community is honoured and the contribution of this sector in the socio-economic development of this country is highlighted. The resolve to protect our handloom heritage and to empower the handloom weavers and workers with greater opportunities is reaffirmed.The Government endeavours to ensure sustainable development of the handloom sector thereby empowering our handloom weavers and workers financially and instilling pride in their exquisite craftsmanship.