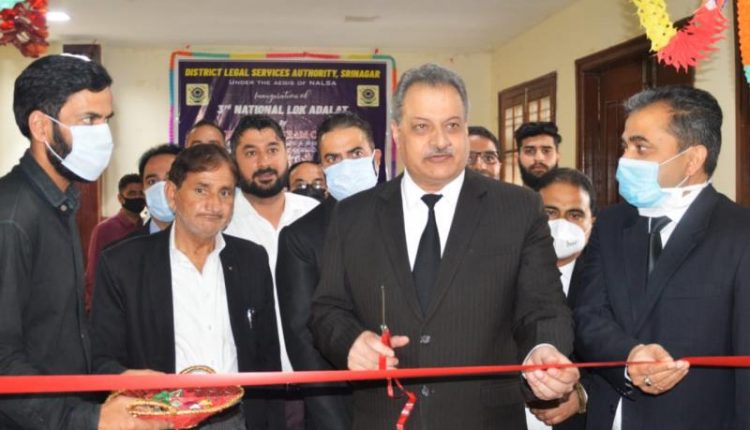 Thousands of cases settled amicably, awards of compensation to MACT victims, others distributed

SRINAGAR : The 3rd- National Lok Adalats were held today across all districts of Kashmir, where thousands of cases were settled amicably and awards of compensation to victims of MACT and other disputes were distributed.

The Lol Adalat were held under the Chairmanship of District Legal Services Authority (Principal District and Sessions Judge) Baramulla Mohammad Yousuf Wani who inaugurated the event at the District Court Complex in presence of Secretary DLSA Mir Sayeem Quyoom.

In Bandipora, A special National Lok Adalat was held at District Court Complex, Bandipora under the chairmanship of DLSA, Principal District and Session Judge Mohammad Ibrahim Wani in which 385 cases of different nature were taken up for settlement, of which, 818 cases were settled amicably.

Officials said 1182 cases were taken up in the said National Lok Adalat out of which 818 Cases were settled amicably & settled amount of Rs 2003700.

In Kupwara, 3871 cases of different natures were put up, out of which 3769 cases were amicably settled and an amount of about Rs.2.30 crore was realized.

In Ganderbal, it was held under the Chairmanship of Ms. Shazia Tabasum Chairperson District Legal Services Authority Ganderbal.

Overall 584 cases were taken up for settlement out of which 355 cases were amicably settled/Compromised on spot. Rs.27750/-(Rupees twenty seven thousand seven hundred and fifty only) was recovered as fine for violations under different statutes, Rs.6043983/-(Rupees sixty lakh forty three thousand nine hundred eighty three only) was awarded as Bank recovery amount, in other civil cases an amount of Rs1054546/- was settled and Rs 2450,000/-( Rupees twenty four lakh fifty thousand only) was awarded in MACT cases.

In National Lok Adalat out of 858 cases of various nature, 628 cases were amicably settled. An amount of Rs.8415850/= was realized in different cases.

On the occasion, 03 Benches were constituted who took up the cases for amicable settlement.

A total of 463 Cases were taken up in the said Lok Adalat out of which 406 cases have been settled by Mediation and reconciliation with a settlement amount of Rs.9832048/=has been recovered as fine and same has been deposited in Government Treasury

Members of Bar,Revenue Officers,Bank Managers and people at large participated in the said National Lok Adalat after observing all SOPs of the Covid-19 pandemic.

Cornell University: Soda tax reduces consumption among boys but not…